Only Test: Afghanistan Enjoy Day 1 Advantage Despite Batting Heroics By Ireland's No.11 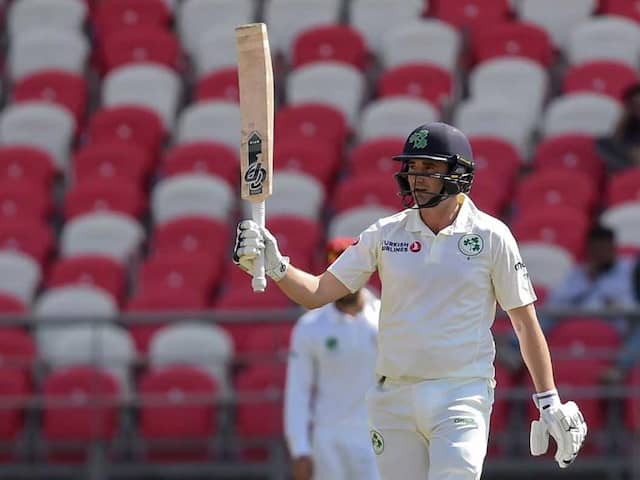 Bowlers put Afghanistan in control despite a defiant half-century from Ireland number 11 Tim Murtagh on the opening day of the one-off Test between the long format's two new entrants on Friday. The match is being played in the north Indian city of Dehradun. Murtagh's knock of 54 is the highest score by a Number 11 on Indian soil. Murtagh made an unbeaten 54 to lift Ireland to 172 after they were left tottering at 69 for eight following their decision to bat first. To cap off a fine day on the field with the bat, Murtagh also bowled a fine spell, giving away only six runs in six overs with the new ball.

In reply to Ireland's total, Afghanistan were 90 for two at stumps, still trailing Ireland by 82 runs in their first innings. Rahmat Shah, on 22, and Hashmatullah Shahidi, on 13, were batting at close of play.

Left-arm spinner James Cameron-Dow struck twice to get openers Ihsanullah, for seven, and Mohammad Shahzad, for 40.

Ireland were in deep trouble at 85 for nine when Murtagh walked into bat and put on 87 runs with George Dockrell, who made 39, for the 10th wicket to frustrate the Afghanistan attack.

He hit four fours and two sixes during his 75-ball stay to register his 11th first-class 50 and get a standing ovation from the Ireland dressing room.

Opener Paul Stirling gave Ireland a brisk start with his 26 but their batting collapsed to 62-7 before lunch. They were all out at tea with Dockrell the last man out.

Nabi combined with wrist spinners Rashid Khan and Waqar Salamkheil -- who took two wickets each -- to run through Ireland's top and middle order.

Both sides are playing their second Test after making their five-day debut last year. Afghanistan lost to India inside two days in Bangalore while Ireland went down to Pakistan in Dublin.

Afghanistan Tim Murtagh Cricket
Get the latest Cricket news, check out the India cricket schedule, Cricket live score . Like us on Facebook or follow us on Twitter for more sports updates. You can also download the NDTV Cricket app for Android or iOS.