Cricket South Africa's board meets in Johannesburg on Tuesday to decide on the next South African Test skipper after a decade of Graeme Smith at the helm. 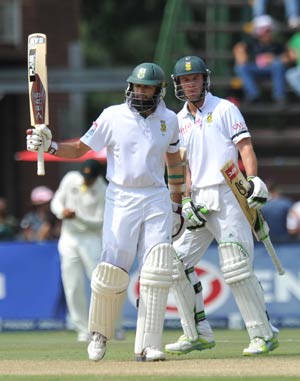 Cricket South Africa's board meets in Johannesburg Tuesday to make what is seen as a crucial decision after a decade of Smith at the helm.

Smith captained South Africa in a world-record 109 Tests before announcing his retirement during the third and final Test against Australia last March.

The national selectors will table their recommendation for the captaincy, but the final decision will be made by the board.

The first assignment of the new captain will be to lead South Africa in two Tests in Sri Lanka during July.

De Villiers, 30, was vice-captain under Smith and is the one-day international (ODI) skipper. He has led the side in 40 ODI games. He had no prior captaincy experience.

He struggled initially, but appeared to grow into the job last season. He has expressed his willingness to lead the Test side.

Amla, 31, captained the South African team at the Under-19 World Cup in New Zealand in 2002 and was appointed captain of the Dolphins franchise early in his first-class career.

He resigned as captain after one season to concentrate on his batting.

Amla was appointed De Villiers' vice-captain of the South African ODI team in 2011 and led the side in three matches, but gave up the job last year.

But Amla has informed the selectors he would be available to captain the Test side.

Both players have outstanding records as batsmen and would bring different styles to the leadership.

De Villiers is an exuberant character who would probably be more instinctive, while Amla would be likely to be more studious and analytical.

Faf du Plessis, 29, who captains the national Twenty20 team, is a third candidate and has displayed the most natural flair for captaincy.

But his relative lack of experience -- he has played in only 14 Tests -- could count against him. His supporters would point out, however, that Smith was made captain after only eight Tests.

With Smith and Jacques Kallis having retired from Test cricket, at least one new batsman is expected to be included in the South African Test squad, with left-hander Stiaan van Zyl a strong contender.

The board meeting is expected to endorse a proposal to increase the target to five black players in each franchise team in an effort to speed up racial transformation.