Fulton made his test debut in 2006 and played 10 tests, with a highest score of 75 and an average of 20, before losing his place in New Zealand's revolving door for test openers. He won a recall for this series, four years after his last test, and cemented his place Friday with an innings of technique and character. 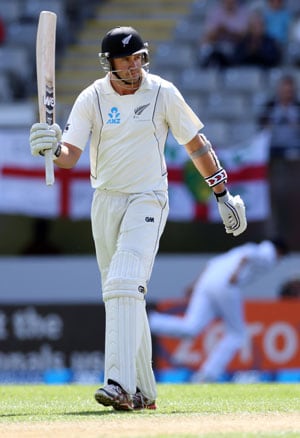 Opening batsman Peter Fulton scored a maiden test century at the age of 34 - seven years after his debut - to guide New Zealand to 250-1 at stumps Friday on the first day of the third cricket test against England.

Fulton carried his bat throughout the day after England won the toss and bowled, reaching 124 not out by stumps in a 171-run, second-wicket partnership with Kane Williamson (83 not out).

Fulton was 41 not out at lunch, after a 79-run opening stand with Hamish Rutherford (37) and he continued through the last two sessions to accumulate runs at a steady pace, putting on 94 runs in the second session with Williamson and 77 in the third.

Steve Finn was the only Englishman with a wicket, with figures of 1-61 at stumps.

After taking 6-51 in New Zealand's first innings in the second test, Stuart Broad was promoted to share the new ball with James Anderson and Finn was demoted to first change. But Broad never settled to a productive line and Anderson, struggling after the Wellington test with heel and back problems, was limiting but really threatening.

Monty Panesar bowled 25 overs, entering the attack in only the 21st over when the England seamers had been blunted. At stumps he had still taken only two wickets in the series at a cost of 122 runs apiece.

Fulton made his test debut in 2006 and played 10 tests, with a highest score of 75 and an average of 20, before losing his place in New Zealand's revolving door for test openers. He won a recall for this series, four years after his last test, and cemented his place Friday with an innings of technique and character.

Fulton became only the second New Zealander, after Zin Harris in South Africa in 1962, to score a maiden century after turning 34.

He had made sound contributions throughout the series - scoring 55 in New Zealand's only innings in the drawn first test at Dunedin and 45 and 46 in the second test at Wellington, which also ended in a rain-affected draw.

He went to 99 with a pull for four off Finn, the 14th four of an innings which, at that stage, also contained three sixes.

"I've played a few test matches now and haven't been able to get a century," Fulton said. "I guess if I'm being brutally honest at the start of this season I thought maybe my time had come and gone.

"So to get that test 100 and cross that off the list is a great feeling."

Williamson provided outstanding support to Fulton through the longest part of the day. After the opening partnership with Rutherford, which blunted the threat of the new ball, Fulton and Williamson drove home England's folly at bowling after winning the toss.

In all three tests in the series the team winning the toss has bowled first: New Zealand in Dunedin and Wellington and England at Eden Park. The tactic has worked only once - in Dunedin where, after a day's delay because of rain, New Zealand bowled out England for 167 in its first innings.

Fulton and Rutherford had almost safely negotiated the first session when Rutherford, with a rush of blood to the head, was out just an over from lunch. Finn tempted him outside off stump, as he had done Fulton, and after a period of patience and caution, Rutherford fell for the bait: he flashed at a wide delivery and sent a rising catch to Cook at second slip.