Hosts England close in on victory in the third Test against South Africa at The Oval. 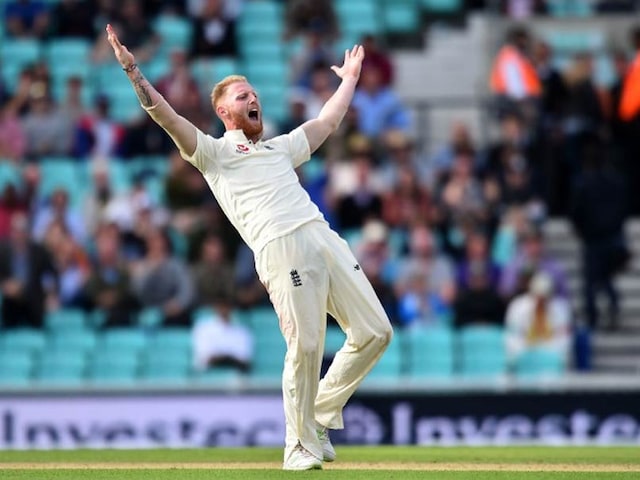 Ben Stokes took two wickets in two balls to leave England eyeing victory in the third Test against South Africa at The Oval on Sunday. South Africa were 117 for four at stumps on the fourth day, needing a further 375 runs to reach a colossal target of 492. One consolation for the Proteas was the fight shown by Dean Elgar (72 not out) and Temba Bavuma (16 not out) who kept England at bay after joining forces with their side in dire trouble at 52 for four.

The 100th Test at The Oval was turning into a personal triumph for Stokes after he laid the platform for England's dominant position with 112 in a first-innings total of 353.

That left South Africa needing to set a new record if they were to achieve an astounding victory, with the most made by any side to win in the fourth innings of a Test the West Indies' 418 for seven against Australia at St John's in 2003.

But while any realistic hopes of an improbable win quickly disappeared, a draw is not yet out of reach for South Africa, particularly if Elgar and Bavuma can continue their defiant stand and the bad weather that has plagued this match returns on Monday.

A draw would ensure this see-saw four-match series remained level at 1-1 ahead of next week's finale at Old Trafford.

Stuart Broad got the ball rolling for England after the declaration by uprooting Heino Kuhn's off stump. Toby Roland-Jones's dream debut then continued when, for the second time this Test, he dismissed star batsman Hashim Amla in single figures.

Amla had made just five on Sunday when, trying to withdraw his bat, he saw the ball fly low off the face to Root at second slip.

Replays confirmed the catch and Amla, caught behind off Roland-Jones for six as the Middlesex seamer took five for 57 in the Proteas' meagre first innings 175, was on his way. It was a far cry from five years ago at The Oval when Amla, now 34, struck South Africa's Test-record score of 311 not out.

Proteas dangerman Quinton de Kock only managed five before he was bowled by an excellent Stokes yorker. Next ball South Africa captain Faf du Plessis, padded up to a Stokes delivery that cut back sharply and was lbw for a golden duck. Du Plessis, who'd fallen in similar fashion to James Anderson for just one in the first innings, reviewed but to no avail.

South Africa were now 52 for four, having lost three wickets for five runs in eight balls.

Durham all-rounder Stokes was on a hat-trick at the start of his next over. Bavuma denied him that prize before left-handed opener Elgar completed a 77-ball fifty.

The only thing missing for England on a great day was a wicket for birthday boy Anderson, their all-time most successful Test bowler, 35 on Sunday.

England resumed Sunday on 74 for one, already a lead of 252.

Keaton Jennings was 34 not out and Tom Westley, one of three debutants in the XI, 28 not out.

South Africa-born Jennings, under pressure for his place after a run of low scores, fell for 48 when caught in the gully off fast bowler Kagiso Rabada.

Meanwhile, number three Westley demonstrated many of the grafting qualities England were accused of lacking during a huge 340-run defeat in the second Test at Trent Bridge.

He completed a maiden Test fifty when he clipped towering quick Morne Morkel off his pads for a ninth boundary in 119 balls.

Westley (59) and Root (50) both fell to Keshav Maharaj after lunch as the left-arm spinner took two for none in four balls.

But Stokes and Jonny Bairstow, with a run-a-ball fifty, kept the runs coming.

Comments
Topics mentioned in this article
England Cricket Team South Africa Cricket Team Ben Stokes Dean Elgar Cricket
Get the latest updates on IPL 2020, check out the IPL Schedule for 2020 and Indian Premier League (IPL) Cricket live score . Like us on Facebook or follow us on Twitter for more sports updates. You can also download the NDTV Cricket app for Android or iOS.