Young opener Imam-ul-Haq, nephew of Pakistan great Inzamam-ul-Haq, smashed a hundred on debut to guide his side to a seven-wicket win in the third one-day international against Sri Lanka on Wednesday. 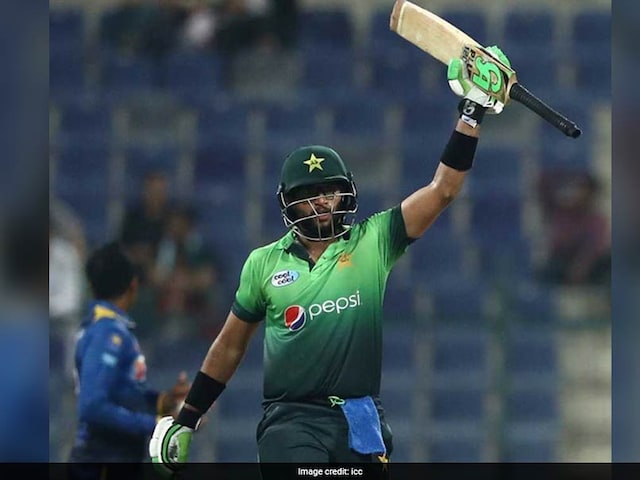 Young opener Imam-ul-Haq, nephew of Pakistan great Inzamam-ul-Haq, smashed a hundred on debut to guide his side to a seven-wicket win in the third one-day international against Sri Lanka on Wednesday. Seamer Hasan Ali became the quickest bowler to reach 50 one-day international wickets for Pakistan as his 5-34 saw Sri Lanka bowled out for 208 in 48.2 overs at Sheikh Zayed Stadium in Abu Dhabi. Imam, whose uncle Inzamam is now a Pakistan selector, became only the second batsman from his country and 13th overall to score a hundred on ODI debut before he finally fell for 100 off 125 balls.

The 21-year-old hit two sixes and five fours as the nominal hosts wrapped up the series with two matches to spare.

Saleem Elahi was the only other Pakistani to hit a debut hundred, also against Sri Lanka at Gujranwala in 1995.

But Imam could have missed that milestone as he was reprieved on 89, having been given out caught behind by Niroshan Dickwella off Lahiru Gamage.

As he was walking back, television umpire Richard Kettleborough found the ball had touched the ground before reaching wicketkeeper Dickwella's gloves.

A relieved Imam returned to the crease and completed his hundred.

Mohammad Hafeez remained not out on 34, scoring the winning single.

Pakistan hold an unassailable 3-0 lead in the five-match series after winning the first match by 83 runs in Dubai and a 32-run victory in the second in Abu Dhabi on Monday.

The remaining games are in Sharjah on Friday and Monday.

With a low target to chase, Imam made a solid start alongside Fakhar Zaman in an opening stand of 78.

Zaman fell for 29, stumped by Dickwella off spinner Jeffrey Vandersay while Babar Zaman was bowled by Gamage for 30.

Sri Lanka, who suffered their ninth straight ODI defeat, were loose with the bat.

Hasan, 23, was ably assisted by leg-spinner Shadab Khan (2-37) as Sri Lanka, who won the toss and batted, lost their last nine wickets for only 106 runs.

Sri Lanka skipper Upul Tharanga (61) and Dickwella (18) put on 59 for the first wicket, but from 102-1 in the 26th over their innings was derailed by Pakistan's bowlers.

Shadab, man-of-the-match for his 52 not out and 3-47 in the second game on Monday, had Dinesh Chandimal (19) leg-before and Tharanga caught in the deep.

Tharanga, who hit a brilliant 112 not out in the previous match, hit five boundaries during his 80-ball knock.

Hasan, who had given Pakistan the early breakthrough with Dickwella's wicket, removed Chamara Kapugedera (18), Milinda Siriwardana (two) and Vandersay (nought) to complete 50 wickets in his 24th ODI.

Hasan's previous best bowling figures were 5-38 against the West Indies in Guyana earlier this year.

Comments
Topics mentioned in this article
Pakistan Cricket Team Sri Lanka Cricket Team Inzamam-ul-Haq Mohammad Hafeez Shadab Khan Cricket
Get the latest Cricket news, check out the India cricket schedule, Cricket live score . Like us on Facebook or follow us on Twitter for more sports updates. You can also download the NDTV Cricket app for Android or iOS.