Less than 43 overs were possible on a day of frequent interruptions but Devon Smith took advantage of the opportunity to compile his first Test half-century since the opening match of the home series against England in Antigua in 2015. 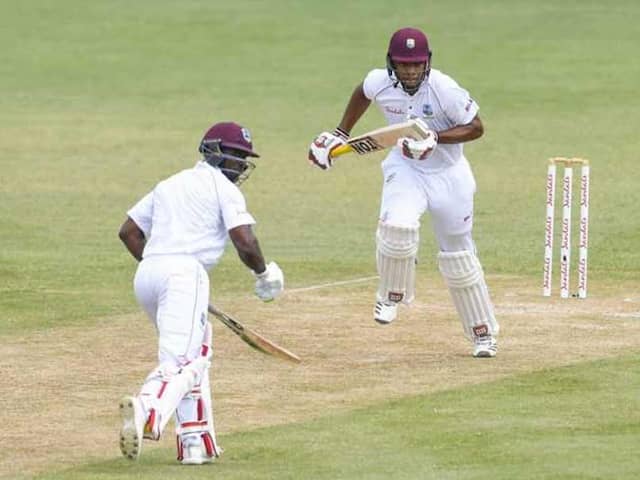 Devon Smith resumes on the third morning on 53 in partnership with Shai Hope.© AFP

Devon Smith battled disciplined bowling and frequent stoppages for rain to compile an unbeaten half-century as the West Indies reached 118 for two in reply to Sri Lanka's first innings total of 253 on a truncated second day of the second Test at the Darren Sammy Stadium in St Lucia on Friday. Less than 43 overs were possible on a day of frequent interruptions but Smith took advantage of the opportunity to compile his first Test half-century since the opening match of the home series against England in Antigua in 2015. He resumes on the third morning, weather permitting, on 53 in partnership with Shai Hope. There has been much discussion through the region over the recall of the 36-year-old Grenadian three years after he played his last Test match.

Following a double-failure in the first Test, notwithstanding a comprehensive 226-run victory for the home side in Trinidad, Smith would have been acutely aware of the attention he was attracting from critics questioning the wisdom of continuing with a player averaging less than 25 runs per innings over his previous 39 Tests.

Together with opening partner Kraigg Brathwaite, he played with exaggerated care through a testing morning session when the Sri Lankan bowlers, especially their three seamers, challenged the duo under overcast skies.

Lahiru Kumara, who impressed with a seven-wicket haul at the Queen's Park Oval, again proved a handful with the pace and bounce extracted from a pitch which continues to offer assistance to the faster bowlers.

Smith's only attempts at unbridled aggression came at the expense of spinner Akila Dananjaya, who was hoisted over long-on and deep midwicket for a four and a six off consecutive deliveries.

When the breakthrough finally came for Sri Lanka though, it was via debutant fast-medium bowler Kasun Rajitha, who exploited Brathwaite's increasing vulnerability outside the off-stump by having him caught behind by wicketkeeper Niroshan Dickwella for 22 after an opening stand of 59.

Brathwaite was also caught behind in both innings of the first Test.

Persistent showers meant only 18 overs were bowled through a frustrating final two sessions of the day, making it difficult for both teams to develop any sort of momentum in the little play that was possible.

Smith found another solid partner in Kieran Powell through this stop-start period and the pair put on 56 runs for the second wicket with the opening batsman reaching the half-century mark, just the eighth 50-plus innings in a Test career which started in 2003 against Australia in Guyana.

Kumara finally got his long overdue reward just before bad light ended play when he removed Powell for 27 via a good low catch by Kusal Mendis at second slip.

More showers are forecast through the weekend but the West Indies will again be looking to Smith to continue his sheet-anchor role in the quest to overhaul Sri Lanka's first innings total with the intention of putting themselves in a series-winning position in the latter stages of the match.

Sri Lanka Cricket Team Devon Smith Shai Hope Cricket
Get the latest Cricket news, check out the India cricket schedule, Cricket live score . Like us on Facebook or follow us on Twitter for more sports updates. You can also download the NDTV Cricket app for Android or iOS.