Calum MacLeod starred for Scotland with a spectacular unbeaten 157 that helped his team beat Afghanistan by seven wickets. 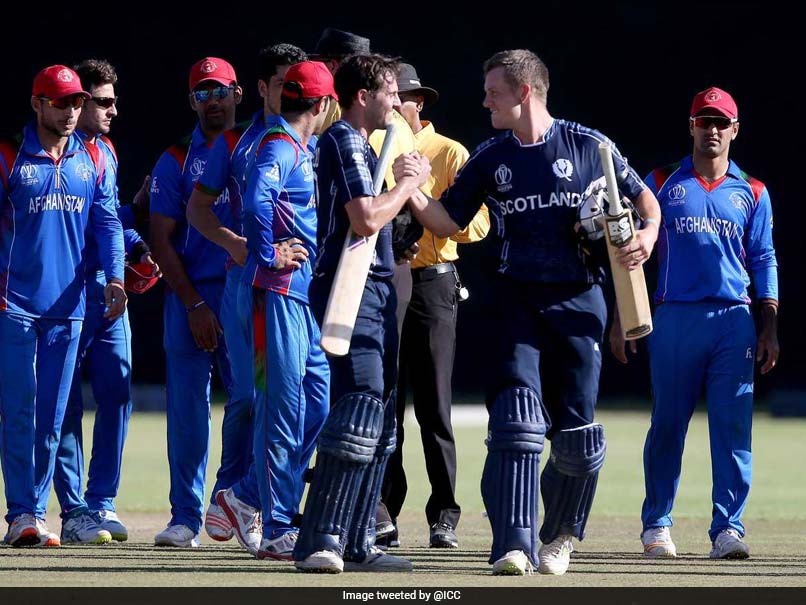 Afghanistan lost their opening match of the 2019 World Cup qualifier to Scotland by 7 wickets.© Twitter

Afghanistan captain Rashid Khan said the drastic change in playing conditions was the reason to behind his team's shock seven-wicket loss to Scotland in their opening 2019 World Cup qualifier at Bulawayo, Zimbabwe on Sunday. Calum MacLeod starred for the Scottish with a spectacular unbeaten 157 that gave his team the surprise victory against a high-flying Afghanistan team. "The wicket was difficult to bat on, it wasn't coming good onto the bat," said 19-year-old Khan, the first-ever teenager to skipper a men's international side."

"Later on when the sun came out, it was totally different and it was quite easy to bat on. The toss is really important in these games, but that's not in our hands, there's nothing we can do about that," added the leg-spinner.

Afghanistan, billed as one of the favourites to qualify for the World Cup, were blown away in their first match courtesy some magnificent batting by MacLeod.

Afghanistan made 255 all out batting first, but MacLeod hammered 23 fours and a six in his blistering 146-ball knock to lead Scotland to victory with 16 deliveries remaining.

Hosts Zimbabwe lead the early Group B table after their 116-run thrashing of Nepal, while the United Arab Emirates and Ireland got off to winning starts in Group A against Papua New Guinea and the Netherlands respectively.

The 10 teams in Zimbabwe are fighting it out for only two places alongside the world's top eight ODI sides at next year's World Cup in England and Wales.

But Richie Berrington joined MacLeod at the crease as the pair put on a 208-run stand to see off Afghanistan and gain a measure of revenge for their narrow defeat by the same opposition at the 2015 World Cup.

"The standout (performance) for us today is MacLeod," said Scotland captain Coetzer.

"It was an unbelievable effort from him. It's a great start to the tournament but we will take every day as it comes."

Rising star Khan was attacked by MacLeod and conceded 68 runs from his nine overs.

The leg-spinner finally ended the partnership by trapping Berrington lbw, but by then the game was gone and Afghanistan will have to bounce back against Zimbabwe on Tuesday, with only the top three teams from each group to reach the Super Six stage.

"We needed some wickets in the middle and we didn't do that," added Khan.

"They played really well, had a good partnership and that took the game away from us."

Comments
Topics mentioned in this article
Afghanistan Scotland Rashid Khan Cricket
Get the latest updates on India vs England Series, India vs England , live score and IPL 2021 Auction . Like us on Facebook or follow us on Twitter for more sports updates. You can also download the NDTV Cricket app for Android or iOS.