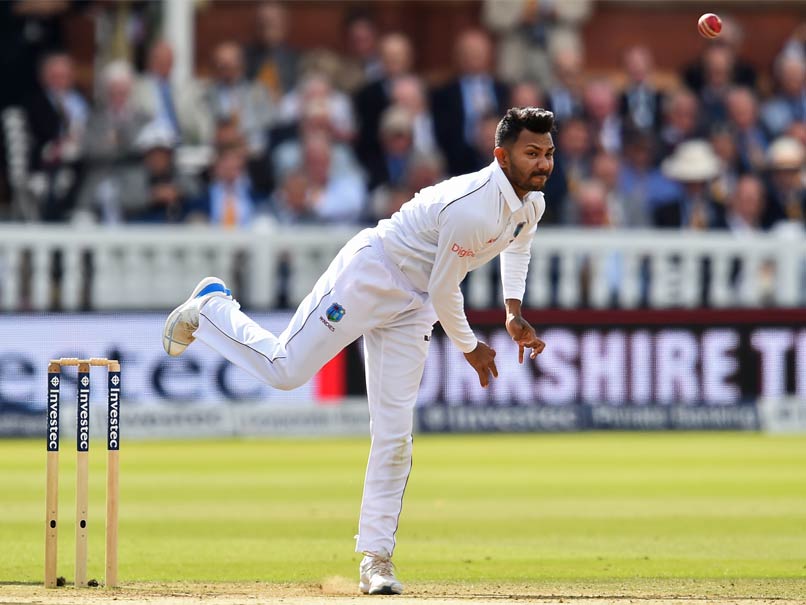 Leg-spinner Devendra Bishoo pricked Zimbabwe's bubble of optimism on Sunday as his five-wicket haul put the West Indies in charge of the first Test at Queens Sports Club. Zimbabwe came into the two-match series in a buoyant mood following the return of Brendan Taylor and Kyle Jarvis to their ranks, and carried it through the opening day when they dismissed the West Indies for 219. But Bishoo's 5 for 79 on the second day was like a bucket of cold water on Zimbabwe's spirits as they were bowled out for 159, with Hamilton Masakadza's 42 the top score. "There were way too many soft dismissals, and the boys are upset with themselves. That wasn't how we wanted to play," said Zimbabwe's batting coach Lance Klusener.

"We've got a second bite at the cherry, but it won't be easy to bat out there."

With Zimbabwe bowled out in just 61.3 overs, the West Indies began their second innings after tea and reached stumps on 88 for one, giving them an overall lead of 148.

Kraigg Brathwaite led the way with an unbeaten 38, while Kyle Hope registered a career-best 32 not out in his fourth Test.

The partnership left Zimbabwe facing a long road back into the game, and with a lingering regret over their batting efforts.

While the turning pitch has provided assistance to the spinners on the opening two days, Zimbabwe's batsmen were largely culpable for their own downfall.

The hosts made a positive start in reply to West Indies' 219 all out, with openers Masakadza and Solomon Mire moving their overnight total from 19 to 44 without loss.

But an overly adventurous stroke from Mire allowed Kemar Roach to strike, as the debutant was caught on the midwicket boundary for 27.

Mire's replacement, Craig Ervine, dug in alongside Masakadza as the pair put on 47 for the second wicket to put Zimbabwe back in control.

But from 91 for one Zimbabwe slipped to 139 for seven as Masakadza felt for a Bishoo delivery and edged behind, Brendan Taylor reverse-swept the legspinner to slip and Sikandar Raza holed out to long-off.

Meanwhile, Sean Williams chased a wide delivery from Roach and was caught behind, before Bishoo completed his five-wicket haul when Regis Chakabva offered a tame catch to backward point.

Shannon Gabriel finished off the innings with the wicket of Chris Mpofu on the stroke of tea, leaving the tourists with a sense of satisfaction.

"Over the last year the bowling department has been functioning, so I'm not surprised that we were able to bowl them out under our score," said West indies bowling coach Roddy Estwick.

"We felt our seamers have been outstanding all year, and once Bishoo came to the party I wasn't surprised we restricted them to this score."

Comments
Topics mentioned in this article
West Indies Cricket Team Zimbabwe Cricket Team Devendra Bishoo Cricket
Get the latest updates on IPL Auction 2023 and check out  IPL 2023 and Live Cricket Score. Like us on Facebook or follow us on Twitter for more sports updates. You can also download the NDTV Cricket app for Android or iOS.