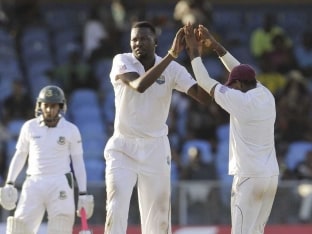 Left-arm spinner Sulieman Benn claimed 5-39 Sunday as the West Indies bowled out Bangladesh for 182 to take a first innings lead of 302 after three days of the first Test.

The hosts are likely to enforce the follow-on for the fourth day on Monday.

Benn got good support from part-time off-spinner Jermaine Blackwood, who claimed 2-14 at the Arnos Vale Ground.

Bangladesh's effort was led by left-hander Mominul Haque, who topscored with 51, and captain Mushfiqur Rahim, who was left 48 not out. But only two other batsmen reached double figures as West Indies achieved a commanding position.

Earlier, the West Indies stretched its overnight 407-3 to 484-7 before the declaration came an hour and a quarter into the morning session.

The 21-year-old Brathwaite, resuming on 205, added seven before his 563-minute vigil ended when he top-edged a sweep off Taijul Islam to short fine leg. The right-handed opener struck 14 fours off 447 balls.

Chanderpaul remained unbeaten for the 47th time in his test career.

Taijul Islam finished with figures of 5-135 on his debut. The left-arm spinner, with two wickets overnight, also claimed captain Denesh Ramdin (5), who top-edged a swing to leg, and Jerome Taylor (10), who hit a full toss to long-on.

Bangladesh were wobbled early by the new ball pair of Kemar Roach and Jerome Taylor, who induced outside edges from Tamim Iqbal (1) and Imrul Kayes (9) respectively to leave the visitors on 18-2.

Tamim drove ambitiously at Roach and was snapped up low at second slip by Darren Bravo, who held a tentative nick from Kayes a few overs later in the same position.

Shamsur blossomed from a shaky start before he lunged forward to Benn and edged to gully for Bravo to take his third of five catches in the innings.

Shannon Gabriel added the key scalp of Mominul with the last ball before the tea break. The left-hander tickled a leg side catch to the wicketkeeper and, even though the batsman reviewed the decision, there was no evidence to overturn umpire Marais Erasmus' verdict.

Bangladesh slumped in the final session as Blackwood, in his first test bowling, prized out Mahmudullah (7) and Nasir Hossain (2).

Mahmudullah was lbw while Nasir holed out to mid-on where Benn held a fine catch running back 15 yards.

Benn then ripped through the lower order, holding a low return catch to dismiss Shuvagata Hom (16) and then claiming Taijul (2), Rubel Hossain (1) and last man Al-Amin Hossain (5) to outside edges.

Bravo grasped two of those edges, making him the eighth man to take five catches in a test innings and only the second West Indian after Darren Sammy last year against India in Mumbai.

Comments
Topics mentioned in this article
West Indies Cricket Team Bangladesh Cricket Team Sulieman Benn Cricket
Get the latest updates on IPL Auction 2023 and check out  IPL 2023 and Live Cricket Score. Like us on Facebook or follow us on Twitter for more sports updates. You can also download the NDTV Cricket app for Android or iOS.