England needed six for a tie off the last ball that would have forced a 'super-over' but that proved beyond Ravi Bopara, who finished on 30 not out as New Zealand took a 1-0 lead in this two-match series. 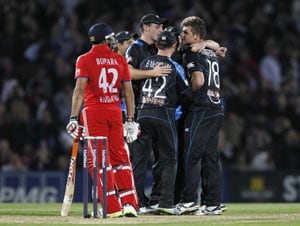 New Zealand captain Brendon McCullum praised Hamish Rutherford for an "outstanding" innings as the Black Caps beat England by just five runs to win the first Twenty20 international at The Oval on Tuesday.

McCullum may have top-scored with 68 but it was left-handed opener Rutherford's dashing 62 that caught the eye during the pair's second-wicket stand of 114 after Boyd Rankin struck early on his England debut to leave the Kiwis one for one.

Defeat meant England had again lost by five runs after going down by that margin in a Champions Trophy final against India reduced to 20 overs per side by rain at Edgbaston on Sunday.

England needed six for a tie off the last ball that would have forced a 'super-over' but that proved beyond Ravi Bopara, who finished on 30 not out as New Zealand took a 1-0 lead in this two-match series.

"Hamish Rutherford was outstanding, the way he struck the ball," said Brendon McCullum. "Boyd Rankin was getting steep bounce and to see Hamish strike the ball so well settled the whole batting line-up."

Rutherford, one of six players who made ducks as Essex were dismissed for just 20 by Lancashire in a County Championship match earlier this month, said: "It's nice to get a few out of the middle.

"Anything over 200 is competitive but it was only a par score considering the flat pitch and the short boundary," added Rutherford.

Meanwhile for England stand-in captain Eoin Morgan it was another case of so near and yet so far after Sunday's heart-breaking loss against India left the side still searching for their first major global one-day international title.

"We got off to a flyer but we couldn't continue it until the end. We were only two blows away from winning the game so the margins are very small.

"It's not as frustrating as against India. That was an opportunity missed but this was a great effort and we can take a lot of positives."

After Morgan won the toss, it took fellow Irishman Rankin just four balls to take a wicket when James Franklin was out for a duck, wicket-keeper Buttler holding an inside edge.

Brendon McCullum saw a top-edge off Rankin fly 83 yards for a six over Buttler's head and Rutherford was even luckier when, on 25, a mistimed cut off Jade Dernbach was dropped by Bopara at point.

Rutherford used his reprieve to slog-sweep and drive off-spinner Tredwell for two sixes in as many balls.

But, going for another big hit, off medium-pacer Wright, he holed out having faced just 35 balls including four sixes and six fours.

Wright, who led the bowling with two for 31, struck again when he yorked Brendon McCullum before Ross Taylor's rapid 32 not out helped New Zealand beyond 200.

However, the runs kept coming from a side still missing star batsman Kevin Pietersen, set to return to England duty in the second match of this series at The Oval on Thursday.

Brendon McCullum's move to bring a slip in as late as the 14th over was rewarded when Taylor took a brilliant leaping one-handed catch off a fiercely edged cut by Morgan as the dangerman fell for just seven.

Wright, who made 52 off just 34 balls to complete a fine all-round match, was then caught behind by Tom Latham, off Mitchell McClenaghan.

England needed 26 off the final 12 balls under the floodlights in front of a capacity crowd of 23,500.

Buttler then produced his trademark 'ramp' shot for a six off Ian Butler but, three balls later, missed with the same stroke and was run out after Latham, who didn't take his gloves off, hit the bowler's end stumps with an underarm throw.

England needed 16 off the final over, bowled by Corey Anderson.

Ben Stokes promptly hoisted Anderson for a huge legside six to make the target 10 off five balls only for the bowler to hold his nerve.