India had bagged four medals at the 2010 Commonwealth Games and the doubles defending champion said she would not be playing mixed category in which she had won a silver. 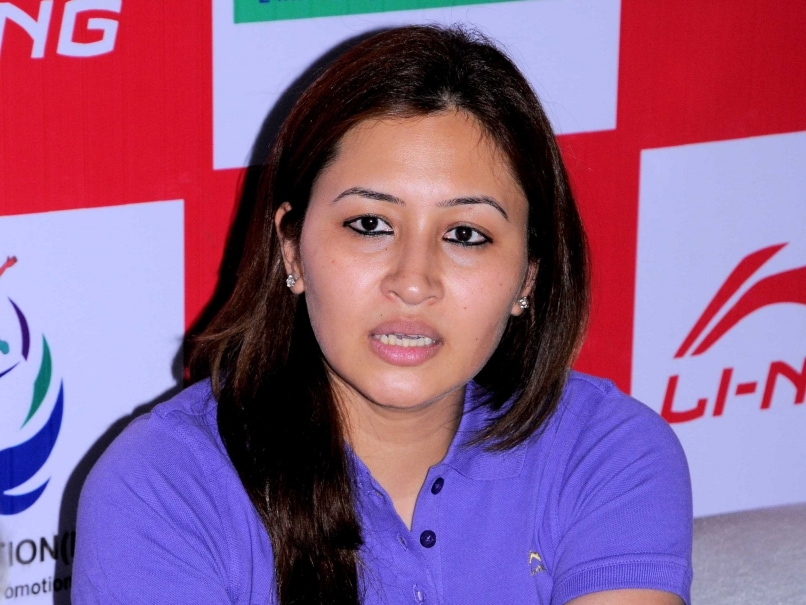 Jwala Gutta said her doubles partner Ashwini Ponnappa with whom she would be defending their doubles title at the Glasgow, was one of the best players in the world.© NDTV
Kolkata:

With Saina Nehwal and P V Sindhu going great guns, India would surely get a minimum of three medals in the upcoming Commonwealth Games in Glasgow, asserted country's No 1 doubles specialist Jwala Gutta.

India had bagged four medals at the 2010 Commonwealth Games and the doubles defending champion in an interview said she would not be playing mixed category in which she had won a silver in the team event.

"We will win at least three from badminton, I am not playing the mixed doubles. I am thinking the womens singles and doubles will do well.

"In doubles it would be tough. But in singles there's not much competition. I am hoping that Saina-Sindhu reach final. Even in rankings, I think there's nobody except Saina and Sindhu, but in doubles you have Malaysians, the English and also the Singaporeans," Jwala told PTI on the sidelines of a promotional programme here.

Jwala further said her doubles partner Ashwini Ponnappa with whom she would be defending their doubles title at the Glasgow, was one of the best players in the world.

"Ashwini is one of the best players in the world. She's famous for her hard smashes, I am lucky to play with her."

"We played well at the Thomas Uber Cup, we did well in Japan and Indonesia in the run up to the commonwealth games. We are in the right track," Jwala said of the Indian badminton team who leave for Glasgow on July 19 with their competition beginning on July 24 and summit clash on August 3.

Her ultimate aim is to do well in Rio 2016, Jwala said. The Hyderabadi ace shuttler went on to thank the Government of India for bringing Commonwealth Games to Delhi in 2010 which has benefited the Olympic sports.

"It's been great, training well for last four months. I am working a lot on my strength. I want to thank the Government of India to bring CWG to Delhi, it has led to massive growth of all sports. There's a lot of public and media attention now," Jwala pointed out.

The Indian badminton glamour girl, who was in a controversy for a tweet against Saina Nehwal, said she was just speaking the truth and not against India's ace singles shuttler Saina Nehwal.

"I didn't tweet against her. We live in a democratic country. No matter how big or small you are, everybody deserves respect," she said referring to her tweet in support of Taufiq Hidayat in the build up to the IBL tournament.

Jwala also had to endure a bitter legal battle with the Badminton Association of India after its disciplinary committee recommended a life ban on her for allegedly delaying a match between Krrish Delhi Smashers and Banga Beats in the franchise league last year.

The prolonged standoff, however, has ended with the national federation dropping all the charges against the ace doubles specialist.

"I was just telling the truth, they had to take back the allegations. I am playing now. Everything is sorted out."

Jwala said she does not fear speaking the truth whether one likes it or not.

"I don't create controversy, I am a person who speaks her mind. If people don't like it that's their problem. I love badminton that has given me many things. If something is going wrong in badminton I will speak.

"Why do you take it as criticism, why not just take it as suggestion in a positive way? I don't lie, don't cheat people or have murdered anybody. Why should I not speak out when something wrong is going on?

"I am what I am, if my family, coach S M Arif my close friends say then probably I will keep quiet but they like me for what I am. Other people don't bother me."

Comments
Topics mentioned in this article
Jwala Gutta Saina Nehwal PV Sindhu Badminton CWG, 2014
Get the latest updates on ICC Women's Cricket World Cup 2022 and IPL 2022, check out the Schedule , Live Score and IPL Points Table. Like us on Facebook or follow us on Twitter for more sports updates. You can also download the NDTV Cricket app for Android or iOS.