Sushila Devi stressed on the need to participate in more international events and increase the number of national competitions for improving performance. 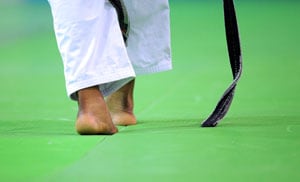 A representational photo of the feet of a judoka as she gets ready to fight.

Commonwealth Games silver winner judoka Sushila Devi feels India could have won a gold at the multi-sport event had the facilities been proper but hoped her feat will bring a change in judo scene in the country.

"We have enough talent and enough capabilities in our country as far as Judo is concerned. But lack of facilities has always kept us behind others," she said.

"Actually Judo is not such a popular sport in this country. So the government does not sanction enough money, I hope the scene will change now," added the 2010 Commonwealth Championships gold medallist.

Sushila showed tremendous determination en route to the final round by knocking out her rivals on Ippon verdicts.

The judoka began her campaign by thrashing M Medza Effa of Cameroon in just one minute 41 seconds before knocking out A Meyer of Australia in similar fashion in the quarterfinals and went on to the semi finals to knock down C Rayner, also of Australia, in an Ippon verdict in the third minute.

However, she could not repeat the same in the final and Scotland's Kimberly Renicks thrashed her in the third minute of the final round with an Ippon verdict.

Sushila stressed on the need to participate in more international events and increase the number of national competitions for improving performance.

"You know, perfection comes with practice. We should be sent for more international events so that we can raise our standards. On the other hand, emphasis should also be given on more national events to bring in young talents," said the 18-year-old.

The Manipur girl also shared how her uncle had been her inspiration from early childhood.

"I always had an attraction for Judo, but it is my uncle for whom I am here. He is a Judo player himself and got me into this game when I was a child. He has trained me in early days and made me ready," she said.

Sushila, along with Navjot Chana, are the first Indian judokas to have bagged medals in any senior international event and this fact also seems to make her uncle L Dinit Singh even more proud who is a part of BSF's 60kg Judo team.

When asked about her preparations for the upcoming Asian Games, a hopeful Sushila said, "I am positive about the games. I am putting in my best efforts, and I am optimistic about not repeating the same mistakes and ensuring a gold."

Sushila also won a gold in under 52kg at the 2011 Asian Youth and Junior Judo Championships in Beirut.

Comments
Topics mentioned in this article
Judo CWG, 2014
Get the latest Cricket news, check out the India cricket schedule, Cricket live score . Like us on Facebook or follow us on Twitter for more sports updates. You can also download the NDTV Cricket app for Android or iOS.