The 33-year-old Anisa Sayyed took silver in the women's 25 metre pistol event of the Commonwealth Games at the Barry Buddon Shooting Centre near Glasgow on July 26. 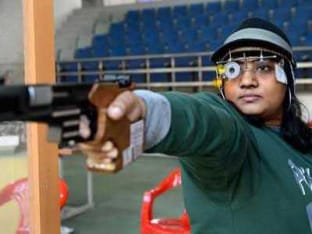 Anisa Sayyed doesn't need to wait for long to succeed in a shooting range but her wait for a job seems to be turning into an endless one with the Haryana government dillydallying for the past three years, leaving the champion shooter with no option but to vent her frustration.

The multiple Commonwealth Games winner, who has clinched a silver in the just-concluded edition in Glasgow to go with her record-breaking double gold in Delhi four years ago, though, is still living in hope.

"I have been waiting for three years, waiting for that promised job. But it has still not seen the light of the day. If they think I don't deserve this then they should not keep me waiting. That's not fair on an athlete who has and continues to strive for international success," Anisa told PTI.

The 33-year-old Anisa took silver in the women's 25 metre pistol event of the Commonwealth Games at the Barry Buddon Shooting Centre near Glasgow on July 26. In the same event, the gold was won by her "good friend" Rahi Sarnobat.

Competing with a friend for the top prize is not a problem, but waiting for something that she richly deserves does make Anisa sad.

"The file has not been processed since 2011, I am still hoping that we will get something out of it. I have met the chief minister (Bhupinder Singh Hooda) twice and he asked me to only concentrate in shooting, and the rest will be taken care of.

"Because of this I quit my job with Railways right after the Delhi CWG in 2010 and also did not show interest in a job offered by Maharashtra government. Looking back I think those were mistakes," she said.

"I seriously hope that something will happen before we leave for the World Championships or at least the Asian Games," Anisa added.

CWG done and dusted with, Anisa, expectedly, has trained her eyes on the upcoming World Championships, and she hopes to fine-tune her techniques and work out the kinks before she sets foot in Granada, Spain for the September 6-20 event, which will be immediately followed by the Asian Games in Incheon, South Korea.

In the worlds, 64 quota places will be up for grabs for the 2016 Rio Olympics, and she knows its significance too well.

"Right now I am not thinking about quota or medal. My target is to improve my technique as much as possible and the rest follows. In the World Championships, the scores are often higher than even Olympics, so you can imagine the competition. We are hoping to win medals at all the five events," Anisa said. "My grip has also not come yet, we got it done in Munich."

The shooters will be assembling for a camp in the capital from August 9-22 and then proceed to Hannover, where they will be based till September 2.

Coming back to the Glasgow Games, Anisa felt 17 medals by the Indian contingent was a creditable one under the circumstances.

"Prior to leaving for the Games we had practised for 10 days in Delhi and and for about a week in Dundee, which is 150kms from Glasgow, to get used to the conditions.

"The weather conditions were tough, there was heavy rain and it was very dark... I think that we could do this is good enough."

She also mentioned that some of the shooters, including Anisa herself, had a tough time with food as they were put up at Dundee and not at the Games Village.

"So all in all I think it was good. And we also won more individual medals this time than last edition," she said.

Comments
Topics mentioned in this article
Shooting CWG, 2014
Get the latest updates on IPL 2020, check out the IPL Schedule for 2020 and Indian Premier League (IPL) Cricket live score . Like us on Facebook or follow us on Twitter for more sports updates. You can also download the NDTV Cricket app for Android or iOS.