England's Fran Halsall finished ahead of Australian sisters Cate and Bronte Campbell to qualify for the women's 50m freestyle semifinals, also setting a Commonwealth Games record in the process. The Campbell sisters had been part of the Aussie 4x100m freestyle relay team that broke the world record in claiming gold on Thursday. 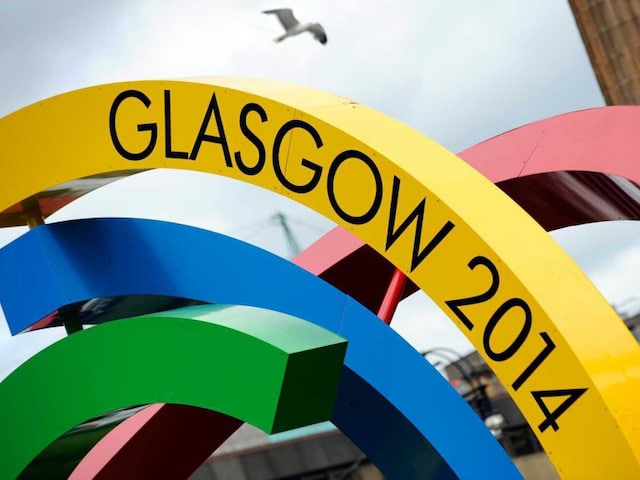 In this representational photo, a dome of the welcoming sign depicts the Commonwealrth Games 2014 in Glasgow.© AFP
Glasgow:

England's Fran Halsall set a new Commonwealth Games record of 24:31sec in qualifying fastest for the semifinals of the women's 50m freestyle ahead of Australian sisters Cate and Bronte Campbell on Friday.

The Campbell sisters had been part of the Aussie 4x100m freestyle relay team that broke the world record in claiming gold on Thursday and Bronte was first to break the Commonwealth record in the third heat of the day.

However, Halsall went 0:21sec better in the next heat and Cate Campbell just failed to break the record again in the final heat as she qualified second fastest just 0:02sec behind Halsall.

"It's pretty good, it's my fastest time of the year so it was a nice way to start the Games," said Halsall ahead of the semifinals later on Friday.

"I took me a little bit of time to get over what I did last night and finally get some rest but I eventually got to sleep," said Murdoch.

However, it was England's Adam Peaty who comfortably led the world class field in the 100m breaststroke as he broke the Commonwealth Games record in a time of 59:47sec.

Michael Jamieson also recovered from his disappointment in finishing second behind Murdoch in the 200m final by qualifying for the 100m semis in 10th overall.

"I just need to try and have fun now. Try and enjoy this, soak up the atmosphere and wish these guys well," said Jamieson.

"I think Ross will have a great chance in this event again." Scotland will be hoping for more gold on Thursday evening in the shape of Daniel Wallace and Robbie Renwick.

Wallace set a new Commonwealth Games record of 4min 11:04sec in qualifying fastest for the final of the men's 400m individual medley with Australian's Travis Mahoney and Thomas Fraser-Holmes also expected to challenge for the medals.

Renwick is the defending champion in the 200m freestyle, but he was comfortably beaten by the favourite Cameron McEvoy of Australia in his heat as he qualified fourth fastest overall.

Canada's Ryan Cochrane, who claimed 400m freestyle gold on Thursday, didn't make the final though as he was eliminated by England's Nick Grainger in a swim off.

Australia solidified their status as heavy favourites to retain their men's 4x100m freestyle relay gold as they qualified fastest ahead of England and Scotland respectively for tonight's final.

There was a comfortable passage into the semifinals of the women's 100m backstroke for another Aussie as Emily Seebholm broke her own Commonwealth Games record from Delhi four years ago in a time of 59:51sec.

Comments
Topics mentioned in this article
CWG, 2014 Swimming
Get the latest Cricket news, check out the India cricket schedule, Cricket live score . Like us on Facebook or follow us on Twitter for more sports updates. You can also download the NDTV Cricket app for Android or iOS.