The Commonwealth Championships have been a happy hunting ground for Sharath. He bagged an individual gold in the 2004 edition, followed by a victory in the men's doubles competition along with Subhajit Saha in 2009. 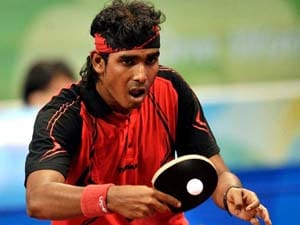 He might have been the flag-bearer of Indian table tennis but lack of form in the last two years hasn't helped his cause, and now Achanta Sharath Kamal is keen to give his 100 per cent in the Commonwealth championships, starting here on Sunday.

"There has been a slump in my form in the last two years. I have not been at my best. But I am confident that I will recover. These (Commonwealth) championship could be the platform," says Sharath Kamal, the highest-ranked Indian in the world.

Though the 69th ranked Indian has been outplayed a number of times by the upcoming talents at the domestic circuit, he seemed content with his overall performance.

"I am doing reasonably well internationally but not in tournaments. Medals here in the home championship will boost my confidence," the 31-year-old said.

The Commonwealth Championships have been a happy hunting ground for Sharath. He bagged an individual gold in the 2004 edition, followed by a victory in the men's doubles competition along with Subhajit Saha in 2009.

"Subhajit and I go as defending doubles champions. We will have to work hard to repeat our performance. Also this would probably be the last time we pair together. We will like to make it memorable," said the 69th ranked Indian.

"And with home crowd support, I am sure we can do it," he added.

Sharath admitted that he was running behind the target that he had set for himself for the season and will have to sweat it out in the competitions.

"I am running slightly behind my target because I haven't played for the last two months. I wanted to be in the region of 50 to 60 by the end of June," he said.

The Tamil Nadu lad was recently signed up by one of the best German clubs, Borussia Dusseldorf.

"It's a dream come true to play along side legends like Timo Boll. I hope to learn new things during my stint with the club," Sharath said.

Meanwhile, 14 nations in the men's event and 13 in women's category have confirmed their participation besides the hosts in the Championships to be held at Thyagaraj Stadium.

Kamlesh Mehta, coach of the men's team, looked upbeat about India's chances in the tournament.

"Singaporean side will the strongest in the competition. We have practised against the Swedish national side during our foreign camp. I feel it is our best chance to give them a fight or even beat them," he said.

The draws for the competition will be held at the venue on Saturday.

Comments
Topics mentioned in this article
Commonwealth Games 2010 Table Tennis Other Sports
Get the latest updates on IPL 2021, check out the IPL 2021 Schedule and Indian Premier League Live Score . Like us on Facebook or follow us on Twitter for more sports updates. You can also download the NDTV Cricket app for Android or iOS.