India also won a silver and bronze in the team championships which ended on Wednesday. With a day left in the tournament, India has won nine medals, surpassing the last edition's tally of seven. 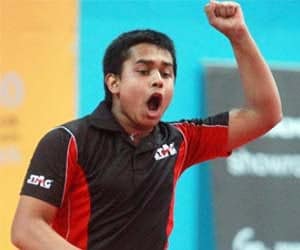 Soumyajit Ghosh and Mouma Das secured a silver in the mixed doubles at the Commonwealth Table Tennis Championships here on Thursday, a day on which India made sure of at least six other medals.

Besides the mixed doubles silver, veteran Mouma sealed two more medals by reaching the semifinals of the singles and doubles event.

The two medals will come from the women's doubles as Neha Aggarwal and Madhurika Patkar also advanced to the semifinals. Mouma-Shamini got past Malaysia's Lee Wei Beh and Sock Khim NG 11-3, 10-12, 11-7, 11-7 while the Neha-Madhurika pairing dispatched compatriots Divya Deshpande and Pooja Sahasrabudhe 12-10, 11-4, 11-3.

The last match of the day was the mixed doubles final and it turned out to be a one-sided affair. Singapore's Zhan Jian and Zhou Yihan were too good for Ghosh and Mouma, winning the crown with a 11-3, 13-11, 11-7 scoreline.

"We beat the top seeds but our final opponents were too quick. They played really well," Ghosh told IANS. He and Mouma were leading 7-3 in the third game before losing the next eight points.

Sharath's match against Yang Zi had the crowd on the edge of their seats. World No. 69 controlled the first game until the Singaporean made a remarkable to comeback to win the next three. The contest went into the seventh deciding game where Sharath took a crucial 6-4 lead. After a few more fiercely contested points, it was 8-8. Sharath had the advantage of his serve but it was the spectacular forehand retrieve that had him fired up, making it 10-8. He exulted after hitting a sizzling forehand winner.

"That point which made 10-8 did it for me," said a relieved Sharath.

India also won a silver and bronze in the team championships which ended on Wednesday. With a day left in the tournament, India has won nine medals, surpassing the last edition's tally of seven.

Comments
Topics mentioned in this article
Commonwealth Games 2010 Table Tennis Soumyajit Ghosh Other Sports
Get the latest updates on ICC T20 Worldcup 2022 and CWG 2022 check out the Schedule, Live Score and Medals Tally. Like us on Facebook or follow us on Twitter for more sports updates. You can also download the NDTV Cricket app for Android or iOS.