Is Pinki Pramanik a man? Test on Monday 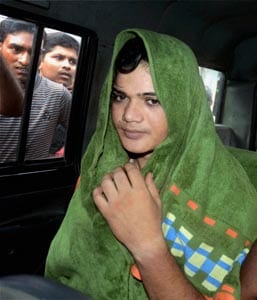 "The court has ordered to conduct the test by June 29. We are trying to convince the athlete to go for the medical examination. We will take the sportsperson for the test on Monday at a government hospital," Rajib Kumar, commissioner of police for Bidhannagar, in North 24-Parganas, told IANS.

Pramanik was arrested late Thursday night and remanded to 14 days' judicial custody by a court on Friday after the athlete's live-in partner, a divorcee and a mother of one, filed a police complaint accusing the athlete of being a male who repeatedly "raped and tortured" her.

On the orders of the court, a medical board was formed for a medical examination which Pramanik twice refused to undergo.

Following the arrest, Pramanik was taken to a private nursing home for a medical check-up where the test reports showed that the former athlete was indeed a male.

Pramanik, however, claimed innocence and said it was a conspiracy.

She won gold in the 4x400 metres relay at the 2006 Asian Games in Doha in Qatar. She was also a silver medallist at the Melbourne Commonwealth Games the same year.

Pramanik retired from athletics three years ago and is now a ticket collector with Eastern Railways.

Comments
Topics mentioned in this article
Athletics Commonwealth Games 2010
Get the latest updates on IPL 2021, check out the IPL 2021 Schedule and Indian Premier League Live Score . Like us on Facebook or follow us on Twitter for more sports updates. You can also download the NDTV Cricket app for Android or iOS.