The doping scandal that has hit Indian sports refuses to die, with two more female athletes now testing positive for an anabolic steroid. 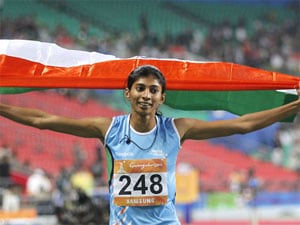 The doping scandal that has hit Indian sports refuses to die, with two more female athletes now testing positive for an anabolic steroid.

The two athletes are Ashwini Akkunji and Priyanka Panwar. Akkunji was a Gold medallist at the 2010 Commomwealth Games and 2010 Asian Games. 'A' or the first samples of both athletes have tested positive. There will be further tests.

All the dope tainted athletes, including Akkunji and Panwar, have been axed from the Asian Championships starting on July 7 in, Japan. The 37-member Indian team would be leaving for Kobe later in the day.

The samples were taken by NADA during the June 11-14 National Inter-State Athletics Meet in Bangalore.

Jose and Kaur had won gold in women's 4X400m relay race in the Commonwealth Games and Asian Games last year.

Jose, Jauna, Hari Krishnan and Sonia tested positive for metabolites of methandienone while Thomas had another anabolic steroid epimethandiol in her urine sample.

Jose and Thomas have been summoned by the NADA and will be facing a panel in Delhi to undergo B sample tests.

Comments
Topics mentioned in this article
Saina Nehwal Commonwealth Games 2010 Athletics
Get the latest updates on IPL 2021, check out the IPL 2021 Schedule and Indian Premier League Live Score . Like us on Facebook or follow us on Twitter for more sports updates. You can also download the NDTV Cricket app for Android or iOS.