The people of West Indies were very disappointed that they were not going to see their cricket team in the final, and at first we were worried if there would be much of a crowd. 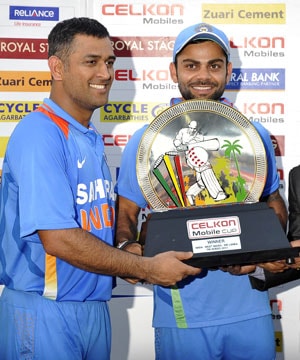 After two weeks and six ODIs of intense cricket, and myself touring, exploring and brining the beautiful Caribbean to you with post cards and blogs, it all came down to this moment.

The final of the Celkon Mobiles Tri Series was at Queen's Park Oval, Trinidad. It was between two old great cricketing rivals, whom have played each other on many occasions.

The people of West Indies were very disappointed that they were not going to see their cricket team in the final, and at first we were worried if there would be much of a crowd.

Once again I was at the ground at 7am doing the sponsor interviews and absorbing the atmosphere of the ground. After a couple of days of rain and play being disrupted it was fantastic to see the sun out and it was a great day for a cricket final.

The big surprise of the day came when it was announced that captain cool himself, MS Dhoni, had recovered from his hamstring injury and was going to be at the helm of the Indian team, once again.

There was nothing to worry about regarding crowds in a cricket loving country, people started coming out in droves to the ground from early in the morning singing and chanting getting ready for a humdinger of a match.Â  One of the amazing things I noticed is that there were hundreds of supporters waving Indian and Sri Lankan flags, these fans had traveled from all across the world to support their beloved countries.

The Triniposse stand was at its best with the gorgeous dancers entertaining the crowd after every over, or 4 and 6 being played.Â Â  This match went down to the wire and not one person was leaving this ground early, very apt for a Final.

Sri Lanka was playing some superb cricket and looked like they were finally going to beat India in an important final. Indian wickets were falling at the rate of knots and I actually tweeted just after Raina got out, "India are in a critical position here and it looks like it is going to be up to Captain Cool, the finisher himself MS Dhoni, to save the day.

Well I called it, spot on, with no wickets in hand and few balls left to win; the great captain took it in his stride and went for gold with a huge 4 and 6 to finish off Sri Lanka bowlers.

What a great final, there were so many Indian fans in the crowd you could barely hear yourself think.
India had once again proved to the world that they are the best cricket team in the world, at the moment.

It was time for me to go and celebrate the win and enjoy my last night in Trinidad. Hope you all enjoyed the Celkon Mobile Tri Series, till next time from me, Sarah-Jayne Bedford, it's goodbye.