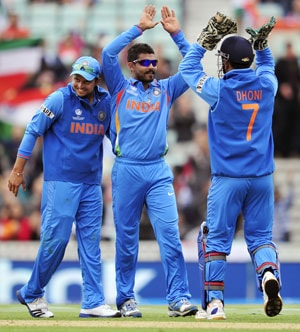 India's back-to-back title triumphs has helped the world champion team retain its top position in the ICC ODI rankings following the annual update of the list announced on Friday.

After a successful ICC Champions Trophy campaign in England, India also emerged victorious in the just-concluded tri-series in the West Indies.

The annual update was released after the conclusion of the tri-series, featuring the hosts, India and Sri Lanka. India won the tri-series after beating Sri Lanka by one wicket in a thrilling finale last night at Port of Spain.

India, which recently won the ICC Champions Trophy, has been in the number one position since February 2013, when it beat England 3-2 at home to regain the top place.

At the June ICC Board meeting, the ICC Board agreed to change the ODI rankings period from three years to four years to ensure that all ODIs played over the four-year cycle between ICC Cricket World Cups count towards a team's ranking at the next event.

The ICC Cricket World Cup 2019 will be a 10-team event, and only the top eight sides on the Rankings Table will gain automatic qualification.

The other teams will have to battle for a place via the ICC Cricket World Cup Qualifier in 2018.

The ICC Board also decided that the annual update to the Test, ODI and T20I rankings should now take place on May 1 each year, rather than August 1, to better align with the current international calendar. This change has been incorporated in the latest update, and has been backdated to May 1, 2013, a statement from the world body said.

The updated table now reflects all ODI matches completed after August 1, 2010. All ODI matches played until the start of May 2014 will be added to this table, so that by May 2014, the ratings will be based on just under four years of results.

As a result, Australia and England have swapped places after the annual update.