Vijender Singh registered a Technical Knockout over American boxer Mike Snider in the US professional circuit in Newark on Saturday night. 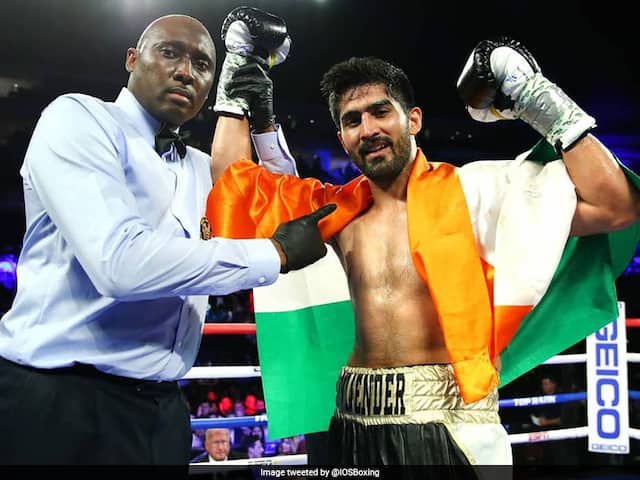 Vijender Singh claimed his 11th consecutive win with a Technical Knockout over American boxer Mike Snider in the US professional circuit in Newark on Saturday night. The 33-year-old from Haryana prevailed in four rounds to remain an unstoppable force in the circuit. "Thanking everyone back home in India & my fans here in USA for supporting me," Vijender Singh thanked his fans for the support after his victory.

Thanking everyone back home in India & my fans here in USA for supporting me
Jai Hind pic.twitter.com/UV9nDCTmdV

"It was excellent getting back in the ring after a long time off. It's great to be here in the USA and to get the win. It was really exciting. I am really happy for my winning debut in USA," Vijender said after the bout.

The triumph came in the second minute of the fourth round when Vijender cornered Snider with a flurry of straight punches, prompting the referee to stop the bout in the Indian's favour.

"It took me about four rounds to get back in the swing of things. I expected it to take two or three rounds, but it took me four. I felt good," said Vijender. This was Vijender's eighth knockout win in all.

The 38-year-old Snider was flailing his arms without any significant force in his punches for most of the bout. Vijender, on the other hand, was sharp as ever despite fighting his first bout in more than a year.

The Indian never looked threatened by the local favourite and thwarted his feeble attacks quite easily. Snider came into the fight with an overall record of 13-5-3.

Vijender would be aiming to compete in two more fights this year after signing up with Hall of Famer Bob Arum's Top Rank Promotions.

"Top Rank has a bigger plan for me, and whatever they say is next, I'm fine with it," Vijender said.

Vijender's British trainer Lee Beard, who has been with the Indian ever since he turned pro in 2015, lauded his commitment.

"I am happy that after a long gap Vijender is finally back in good shape and action in the ring. His dedication helped him. We will now look forward to have bigger plans for him," he said.

Commenting on his defeat, Snider said, "Vijender is a good boxer and I believe I underestimated his experience and technique. It was his day and he won. I had never thought that I would lose in early rounds."