Vijender Singh is now shifting his focus towards the US professional circuit. 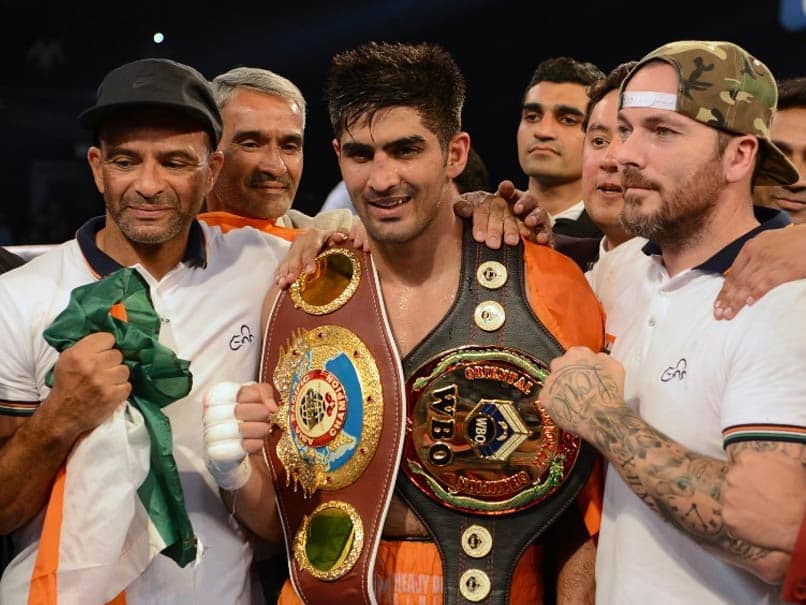 India's star boxer Vijender Singh said it was his "dream come true" to fight in the United States and he is next hoping for a world title bout against Mexican superstar Canelo Alvarez at the Madison Square Garden. Vijender Singh, a bronze medal winner at the 2008 Beijing Olympics, penned a new deal with legendary boxing promoter Bob Arum. Vijender Singh turned pro in 2015 and is still unbeaten with 10 wins to his name. However, the Indian star failed to get a fight this year and has now teamed up with Arum's Top Rank Promotion.

Having joined Arum, Vijender will have to opportunity to train with well-known coaches including Robert Garcia and Freddie Roach, the long-time handler of Filipino great Manny Pacquiao.

"It's great to be associated with Top Rank. I want to take my unbeaten performance in UK and India to America as well," Vijender told AFP on Friday.

"They will grant us three to five fights in a year depending upon my training and fitness. US is the place to be when it comes to pro boxing."

Vijender said it was his ambition to square off with middleweight world champion Alvarez, who is taking on Britain's WBA super middleweight champ Rocky Fielding at New York's Madison Square Garden on December 15.

"If I can get Canelo at Madison Square Garden, what better than that. He is fighting in the super middleweight category with Rocky Fielding. He is a good fighter and if I do get a chance to face him for the world title then why not," said Vijender Singh.

Vijender believes training with big names like Garcia and Roach will lift his career.

"Bob Arum introduced us to Garcia and Roach. We are still trying to figure out who will ultimately train me. But certainly they are all big names and it will be an honour to be coached by them," he said.

"I am training hard despite not getting a fight this year. But will take it to the next level when I travel to the US later this month," added the Indian, whose last fight was against African champion Ernest Amuzu in December 2017.

Vijender's scheduled fight in July this year against Briton Lee Markham for the Commonwealth super middleweight title was called off after his opponent pulled out due to injury.

Vijender became a national hero 10 years ago when he became the first Indian to win a boxing medal at the Olympics.