Despite being in different weight catrgories, Vijender Singh feels that there is no reason why the fight against Amir Khan can't be arranged. 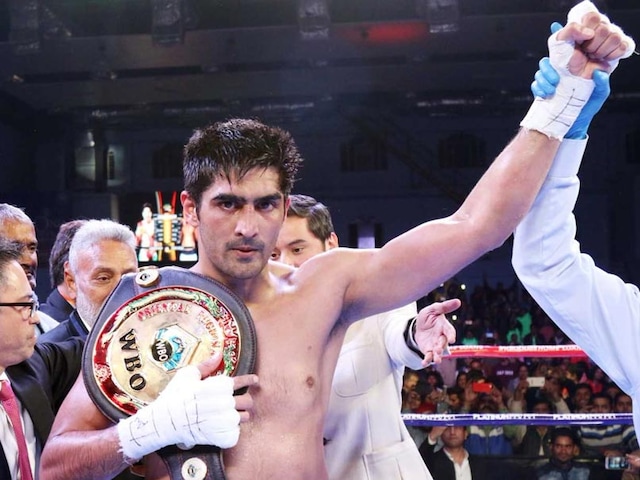 Vijender Singh disposed off West African Boxing Union Middleweight champion Ernest Amuzu withoust much fuss on Saturday night and the Indian boxing star has now set his sights on the Commonwealth and World Championship title. However, another fight on Vijender's radar is that against British boxer Amir Khan. Despite being in different weight catrgories, 32-year-old Vijender feels that there is no reason why the fight against the British-Pakistani boxer can't be arranged. Vijender's promoter too said that his team were working on making this mega fight a reality.

Neerav Tomar of IOS took the example of the bout between Floyd Mayweather and Manny Pacquiao and said that the fight can be arranged.

"We have seen such fights before -- like between Mayweather and Pacquiao -- then why a fight between Vijender and Amir cannot be arranged. In fact, we are working on it, and hopefully it will take place.

"Amir is 72 (kg) and presently Vijender is 76.2 and if he has to come down it can be tough for him. His trainer's advice would be the deciding factor," Tomar said.

Meanwhile, Vijender was in top form and completely outclassed Amuzu with an unanimous verdict to retain his WBO Oriental and Asia Pacific Super middleweight titles.

"Happy to end this year on a winning note. Now I will look forward to play at least two titles next year -- Commonwealth and World title. I would like to thank the people of Jaipur for making this show a big success and thanks to all my fans across India for their support," Vijender said after his bout at the Sawai Mansingh Stadium.

Vijender, however, refuted the claim that the African boxer was not a worthy opponent considering his lower ranking.

"I know he is quite low in ranking as compared to me. But one blow can decide the fight. He posed a challenge in the first two rounds and when I started dominating all of a sudden I sustained a deep cut on my forehead and for a moment it appeared that all was finished.

"I was shaken but fortunately there came a break, giving me the time to recoup again."