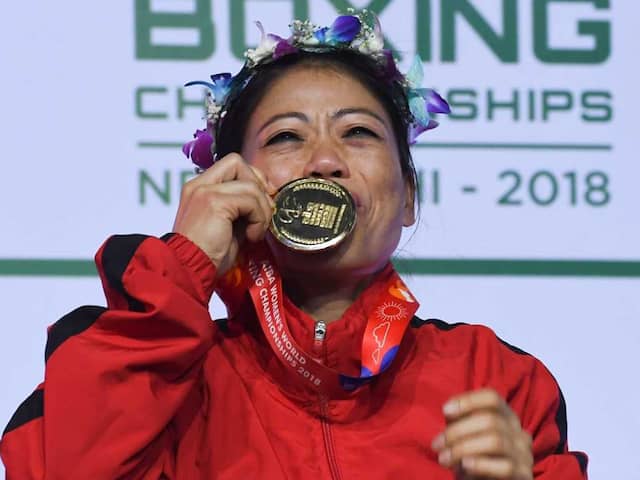 Mary Kom has been a defining force in Indian boxing.© AFP

Mary Kom has been a defining force in Indian boxing for well over a decade but the timeless wonder managed to surpass even herself, obliterating everyone and everything else along the way in a tumultuous year for the sport. She turned 36 the day an unprecedented sixth world title became hers in front of adoring home fans. But it wouldn't be wrong to call Mary Kom ageless for she was around when women's boxing took baby-steps towards going mainstream and she is around when the sport gears up for an Olympic expansion in 2020.

That, of course, is subject to the under-fire International Boxing Association (AIBA) saving the sport from Olympic exclusion in the face of mounting IOC criticism of its administrators, particularly the alleged criminal antecedents of its President Gafur Rakhimov.

"Mary Kom is amazing, there is no other way to describe her. Performing at that level, beating younger girls, it is quite remarkable," Indian Boxing's High Performance Director Santiago Nieva told PTI, trying to sum up the legend of Mary Kom.

This is not to say that nothing else happened in Indian boxing. There were quite a few medals to celebrate, a prominent one being Amit Panghal's Asian Games gold.

What made it remarkable was that he defeated reigning Olympic champion Hasanboy Dusmatov in the final.

In a breakthrough year for him, Amit (49kg) also won a silver at the Commonwealth Games.

Then there was the discovery of a new star in Gaurav Solanki (52kg) after his rather unexpected gold medals at the CWG and the prestigious Chemistry Cup in Germany.

The two Army men were also top finishers at the inaugural India Open in Delhi, the biggest ever prize money tournament hosted by the country with a winners' purse of over Rs 1.5 lakh.

"It has been a very positive year for Indian boxing. We are a country which expects medals but I think a bigger measure of success is the performance and on that count, we did well," said Nieva.

"We discovered new faces like Gaurav and that speaks volumes about India's boxing strength," he added.

But that wasn't enough to shift the spotlight away from Mary Kom, whose year started with a gold (India Open) and ended with a gold (the world championships).

These were two of the four yellow metals she picked up in all, including the CWG top honours.

In between, there was also a silver at a prestigious European tournament in Bulgaria. Plus there was the small matter of being an active Parliamentarian with a decent attendance record in the Rajya Sabha.

But her feats, however remarkable, can't really cover up for the lack of depth in Indian women's boxing.

She was India's sole gold-winner in three exclusively women competitions this year and when the team travelled without her for the Asian Games, it drew a blank in Jakarta.

She is gunning for an Olympic gold come 2020 but given that the Manipuri would have to compete in 51kg, instead of her preferred 48kg category, it remains to be seen how her body holds up for the qualifiers next year.

But the fact that she still remains India's best bet for a gold at any major competition doesn't paint a particularly inspiring picture of the state of women's boxing in the country.

In the men's circuit, India registered an unprecedented eight medals at the Commonwealth Games -- including two gold won by Gaurav and Vikas Krishan (75kg).

But there was an inexplicable dip in the Asian Games with Amit's gold, along with Vikas' bronze, saving the team the blushes.

"We expected to do a lot better in the Asian Games but we didn't win as many medals as we would have liked. We are nonetheless on the right path," asserted Nieva.

A brand new selection policy came into force at the beginning of the year and it caused quite an upheaval. For the first time ever, the traditional route of selection via trials was done away with and in came a points system.

Boxers were rated based on their performances in the national camp and tournaments of varying points value which ultimately decided the spots in CWG as well as the Asiad teams.

Trials were held but only for categories in which the coaches and selectors felt the points difference was minimal and the call too close to take.

As expected, omissions caused heartbreaks which led to outbursts on why the change was introduced.

It remains to be seen how the new system's implementation pans out when the stakes go higher next year with the Olympic qualifiers lined up.

Internationally, boxing's very future as an Olympic sport hung in balance owing to Rakhimov's re-election as AIBA President. The IOC has stopped boxing's funding and is demanding better administration in AIBA.

Repeated warnings have gone out but Rakhimov has so far refused to step aside despite his name being there in a US Treasury Department list of people with links to organised crime.

But the IOC has promised to protect the interests of the boxers, keeping alive Olympic hopes in all corners of the world.

In the professional circuit, Vijender Singh signed up with the legendary Bob Arum and will be making US debut next year after an unbeaten run in England and India.

However, he was not seen in action through the year. Joining him in the circuit was Vikas, who also signed up with Arum.

Arum is a hall of famer in international boxing and has managed the likes of Oscar de la Hoya and Floyd Mayweather Jr. among others.