The news comes a week after Britain's Tyson Fury stopped Deontay Wilder in the seventh round of their heavyweight title rematch in Las Vegas. 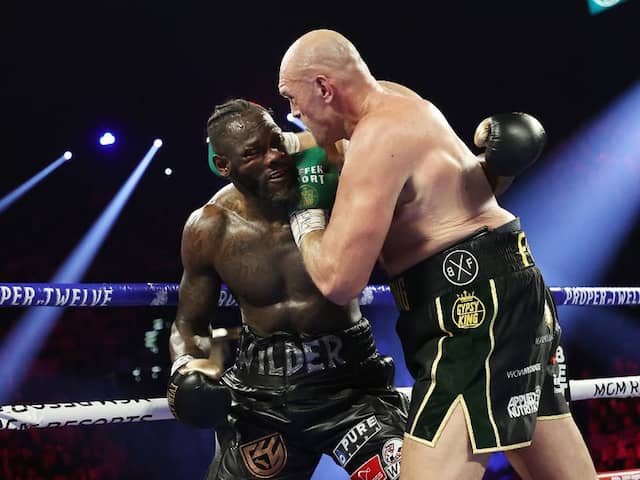 Dethroned world heavyweight champion Deontay Wilder has exercised his rematch clause and will fight Tyson Fury a third time, according to media reports on Saturday. BT Sport, citing promoters Bob Arum and Frank Warren, and Yahoo Sports, reported Wilder had officially exercised his contractual rematch clause and will take on Fury for a third time later this year. The news comes a week after Britain's Fury stopped Wilder in the seventh round of their heavyweight title rematch in Las Vegas. Despite clamour for a unification fight between Fury and fellow Briton Anthony Joshua, Wilder was widely expected to exercise his contractual right for a rematch -- likely to take place by July.

In a video message posted on social media on late Friday, Wilder promised to return "in a few months."

"I will rise again," Wilder stated. "I will be back. We will rise like a phoenix from the ashes and regain the title.

"I'll see you in a few months. For the war has just begun."

Wilder also said on Friday that he would keep co-trainer Mark Breland in his corner, despite earlier hints that he was ready to part company with Breland, who threw in the towel in the seventh round of the loss to Fury.

"But I understand that my corner and my team has my best interest at heart. Mark Breland is still a part of Team Wilder and our team looks forward to preparing for the rematch."

Breland, a former Olympic and world champion, called a halt to last week's fight at the MGM Grand Garden Arena after Wilder had been knocked down twice and pummelled relentlessly by Fury.

Fury seized the World Boxing Council heavyweight title from Wilder, 14 months after the two fought to a dramatic split-decision draw in their first meeting in Los Angeles.