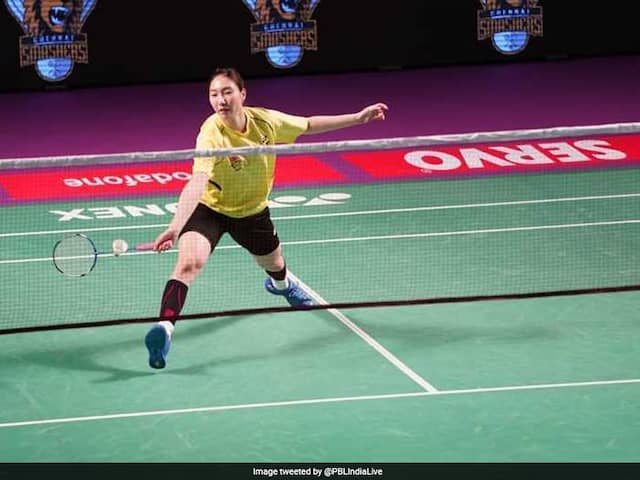 Chennai Smashers defeated table toppers Ahmedabad Smash Masters 6-1 in a Premier Badminton League (PBL) clash at the Shree Chhatrapati Shivaji Sports Complex in Pune on Sunday. Commonwealth Games bronze medallist Rajeev Ouseph upset Ahmedabad Trump Viktor Axelsen and former World No. 2 Sung Ji Hyun won the Chennai Trump clash with Kirsty Gilmour to inflict the first defeat of the season on the Smash Masters. Ouseph's huge win over the Ahmedabad skipper Axelsen denied any hope of a comeback and paved the way for an absolutely flawless performance by the Smashers where they won all five matches of the tie.

Struggling to retrieve his shots, Axelsen looked to be lacking in his usual firepower and conviction and conceded the opener 12-15. Ouseph might have felt a bit complacent after that strong start for he let a string of errors creep into his game which allowed the Dane to come back and take the second game effortlessly 15-7.

In a riveting decider, the two were tied till 11-11 following which the Chennai man upped the intensity of his attack with his brutal down-the-line smashes. With Axelsen looking very weary, it was just a matter of time before Ouseph completed the memorable 15-12, 7-15, 15-13 upset.

Chennai's icon player Sung Ji Hyun continued the momentum to put her team on the path of a commanding win. The Korean had mastered Kirsty Gilmour twice on the world tour and that too, in straight games. It was no exception on Sunday as she smartly kept manoeuvring the Scot to open up the court and finished the points with her sharp crosscourt smashes. The World No. 11 hardly faced any resistance in the 15-11, 15-9 win that turned out to be the easiest victory of the day for the yellow brigade.

Earlier, birthday boy Sourabh Verma lost his opening men's singles match to Chennai's Chong Wei Feng in a stunning comeback show by the Malaysian. Verma's deceptions made life difficult for Chong in the first game but he remained unfazed and injected more pace and power into his shots to set up a decider in a close second game. In the third game, the southpaw used his lefty shots to his advantage to take the game away from an erratic Sourabh for an 8-15, 15-14, 15-9 win.

In the mixed doubles rubber, World No. 9 pair of Chris and Gabrielle Adcock came back from an 11- 13 deficit in Game 2 to beat Ahmedabad's Sikki Reddy and Satwiksairaj 15-14, 15-13. Sumeeth Reddy and Adcock finished the tie with a fabulous 15-11, 15-12 win over Ahmedabad's Rankireddy and Lee Chun Hei Reginald there by ensuring six points from the tie while Ahmedabad Smash Masters is posted second on the leader board with 11 points from 20 matches played.