Azarenka, who broke through for her first major title in beating Maria Sharapova in last year's Melbourne final, faces a tough task to defend her crown with a potential semi-final against the American great. 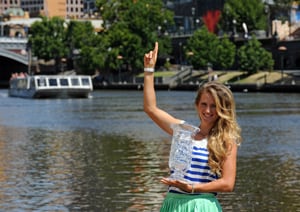 World number one Victoria Azarenka and 15-time Grand Slam champion Serena Williams were Friday pitted in the same half of the women's singles draw for next week's Australian Open.

Azarenka, who broke through for her first major title in beating Maria Sharapova in last year's Melbourne final, faces a tough task to defend her crown with a potential semi-final against the American great.

Second seed Sharapova has Polish world number four Agnieszka Radwanska in her bottom half of the draw.

The Belarusian Azarenka will open her title defence against Romania's Monica Niculescu while five-time Australian Open champion Williams takes on another Romanian, Edina Gallovits-Hall, first up.

Sharapova, who pulled out of the lead-in Brisbane International tournament with a collarbone problem, gets her campaign underway against fellow Russian Olga Puchkova.

Radwanska, who is on a winning streak of eight matches this year and will go into the Australian Open having already played in two finals in Auckland and Sydney in 2013, faces Australian Bojana Bobusic in the opening round.

China's sixth seed Li Na faces a potential quarter-final with Radwanska, whom she lost to in the Sydney semis on Thursday.

Australian ninth seed Samantha Stosur will look to get her home Grand Slam off to a winning start against Taiwan's Kai-Chen Chang, and could face China's Zheng Jie, who beat her this week in Sydney, if she makes the second round.

Comments
Topics mentioned in this article
Australian Open 2013 Tennis Maria Sharapova Victoria Azarenka
Get the latest updates on ICC T20 Worldcup 2022 and CWG 2022 check out the Schedule, Live Score and Medals Tally. Like us on Facebook or follow us on Twitter for more sports updates. You can also download the NDTV Cricket app for Android or iOS.