Now comes the rest of the season, and high on the list is improving her lopsided won one, lost 11 record against the mighty Williams, considered easily the best women's player when fit. 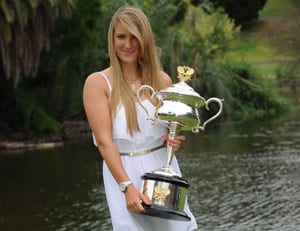 A glint of Belarusian steel and the support of her crazy entourage have given Victoria Azarenka hope she can win any Grand Slam title -- and take on her nemesis, the great Serena Williams.

Celebrations were long and noisy for the world number one after her win over Li Na in Saturday's eventful final, when she overcame a hostile crowd and a host of distractions to successfully defend her title.

After a night on the town with her boyfriend, colourful LMFAO musician Redfoo, the world number one had just four hours' sleep before confidently telling media she believes she can "make it happen" at any major.

"Every one," said the tall blonde, 23, when asked which Grand Slam tournament she would most like to win this year.

"I mean, you cannot prefer any because they are so different, so special.

Saturday evening started bleakly for Azarenka when, extraordinarily for a Grand Slam final, she was subjected to jeers and occasional boos at Rod Laver Arena, and near-silence when she won important points.

Azarenka had raised suspicions of gamesmanship in her semi-final against Sloane Stephens, when she took a medical timeout after blowing five match points, and then returned and broke for victory.

But after Li fell twice, twisting her ankle and briefly blacking out, and the match was interrupted for fireworks, Azarenka was able to master the distractions and retain her only Grand Slam title.

Afterwards, as she strode through the stadium corridors with the Daphne Akhurst Memorial Cup, accompanied by the wild-haired Redfoo, she exuded the satisfaction of a woman who had faced her critics, and won.

"It's been a rollercoaster, definitely," she admitted. "I had to go through things. I have my team around me, and they're like my family. They're taking care of me and they're really strong."

Now comes the rest of the season, and high on the list is improving her lopsided won one, lost 11 record against the mighty Williams, considered easily the best women's player when fit.

"I'm sure we're going to have a few matches," Azarenka said. "To predict, I never do that. I just try to work hard. I can always say Serena, Maria (Sharapova), Li Na, all these girls, they really push to improve.

"We elevate each other. That's what's great about women's tennis right now."

Azarenka won six titles in 2012, including the Australian Open, to become world number one, a position she has defended from Williams with Saturday's victory.

Now backed by Redfoo, unmissable in his leopardskin and lime-green hoodie, and 'Get Your Grunt On' T-shirt, Azarenka is not looking back.

Comments
Topics mentioned in this article
Australian Open 2013 Tennis Na Li Victoria Azarenka
Get the latest updates on IPL 2021, IPL Points Table , IPL Schedule 2021 , live score . Like us on Facebook or follow us on Twitter for more sports updates. You can also download the NDTV Cricket app for Android or iOS.