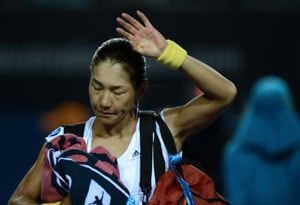 Kimiko Date-Krumm fell one win short of becoming the oldest player to reach a Grand Slam fourth round Saturday when the age-defying Japanese star suffered a narrow loss at the Australian Open.

The result, together with Ayumi Morita's brave defeat at the hands of tournament favourite Serena Williams, leaves China's Li Na and Japan's men's number one, Kei Nishikori, as the last Asian players standing.

Morita earned the distinction of becoming the first player to break Williams at the tournament, and she troubled the 15-time Grand Slam winner as she took a 3-0 lead in the second set.

However Williams, eyeing a calendar-year Grand Slam this year, quickly regained focus and she reeled off the next six games in a row to take it 6-1, 6-3, reaching the fourth round for the loss of just six games.

"I only have positive things to say (about Morita)," Williams said. "I thought she played really well. She played at a level higher than I expected so it took me off guard. She was just consistent, really consistent."

On Sunday, Nishikori will take on fourth seed David Ferrer as he bids to repeat last year's quarter-final appearance, the best ever Grand Slam run by a Japanese man.

Twelve months ago, he outlasted former finalist Jo-Wilfried Tsonga in a five-set thriller -- before losing to Andy Murray in the last eight -- and he takes a winning 2-1 record into the match against Ferrer.

"Ferrer is playing well. He's always tough to play. He gets every ball and he's not easy to beat. But, you know, I beat him before," Nishikori said.

Ferrer said it would be a "difficult" match after his defeats to Nishikori at last year's Olympics and the 2008 US Open, their last Grand Slam meeting.

"It's going to be a very physical match. Because he has very good shots, very powerful on all his shots. So I will need be fast on my legs."

Li will play 18th-seeded German Julia Goerges on Sunday as she attempts to reach the quarter-finals for the third time in the last four campaigns.

Comments
Topics mentioned in this article
Tennis Australian Open 2013 Kimiko Date-Krumm Bojana Jovanovski
Get the latest Cricket news, check out the India cricket schedule, Cricket live score . Like us on Facebook or follow us on Twitter for more sports updates. You can also download the NDTV Cricket app for Android or iOS.