Australian Open runner-up Li Na and Serena Williams too are expected to rise in WTA rankings to be out on Monday. 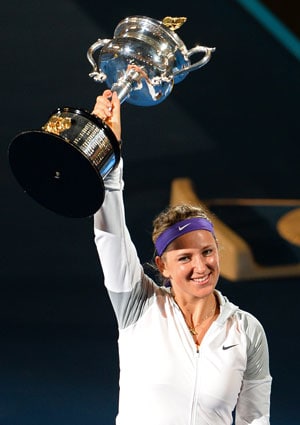 Victoria Azarenka will keep her No.1 ranking after defeating Li Na to successfully defend her Australian Open title.

Azarenka needed to win Saturday's final to maintain her hold on the top spot, otherwise Serena Williams, who lost in the quarterfinals, would have become No.1.

Williams will rise a place to No.2 when the new rankings are released on Monday, trading spots with Maria Sharapova, who lost in the semifinals at Melbourne Park.

Poland's Agnieszka Radwanska will remain fourth and Li Na will be fifth, up by one place.

The biggest mover in the rankings was 19-year-old American Sloane Stephens, whose semifinal appearance at the Australian Open, which included a quarterfinal win over Williams, moved her from 29th to 17th.

Comments
Topics mentioned in this article
Australian Open 2013 Tennis Maria Sharapova Na Li Victoria Azarenka Agnieszka Radwanska
Get the latest updates on IPL 2021, IPL Points Table , IPL Schedule 2021 , live score . Like us on Facebook or follow us on Twitter for more sports updates. You can also download the NDTV Cricket app for Android or iOS.