India vs Australia: Fast bowler T Natarajan, added to India's Test squad as replacement for Umesh Yadav, is ready for "next set of challenges." 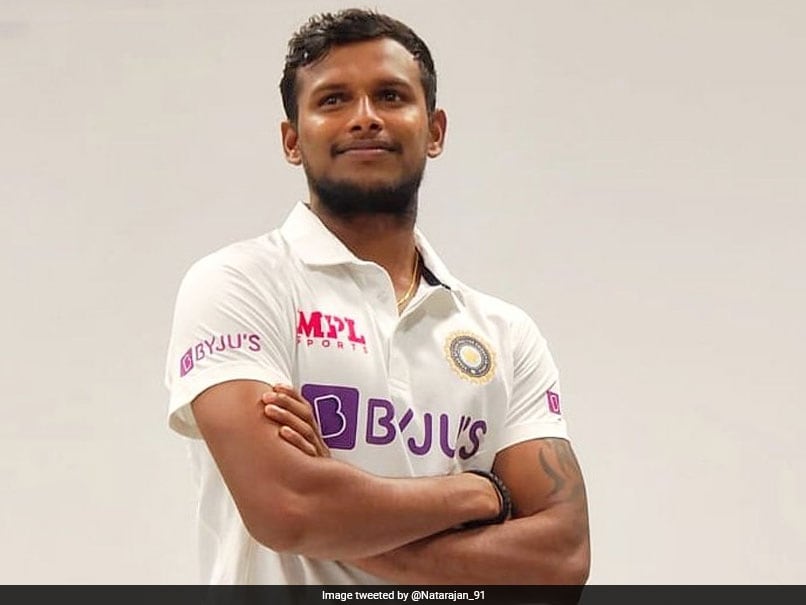 India vs Australia: T Natarajan is in line to make his debut in the Sydney Test against Australia.© T Natarajan/Twitter

Pacer T Natarajan on Tuesday said that he is awaiting his next challenge as he shared a photo of himself donning the white Test jersey. Natarajan shared the photo on his Twitter handle and he captioned the post as: "A proud moment to wear the white jersey. Ready for the next set of challenges." Natarajan was added to the squad for the remaining two Test matches against Australia on January 1. The left-arm pacer had replaced Umesh Yadav, who sustained a strain in his left calf muscle on Day 3 of the Boxing Day Test in Melbourne.

A proud moment to wear the white jersey Ready for the next set of challenges #TeamIndia @BCCI pic.twitter.com/TInWJ9rYpU

"The All-India Senior Selection Committee has named T Natarajan as Yadav's replacement," the BCCI said in an official statement.

"Ahead of the Boxing Day Test, Shardul Thakur was added to the Test squad as Mohd. Shami's replacement after the senior fast bowler suffered a hairline fracture in his right forearm.

"Both Shami and Umesh Yadav will head to the National Cricket Academy in Bengaluru for further rehabilitation of their injuries," the release read.

On Tuesday, the BCCI confirmed that batsman KL Rahul has been ruled out of the remaining two Tests against Australia.

The decision was taken after Rahul sprained his left wrist while batting in the nets at the Melbourne Cricket Ground during the team's practice session on Saturday.

Rahul will now return to India and he will head to the National Cricket Academy (NCA) in Bengaluru for further rehabilitation of his injury.

The four-match series between India and Australia currently stands levelled at 1-1 and the third Test is slated to be played at the Sydney Cricket Ground from January 7.

Both the Indian and Australian lineups moved to Sydney on January 4. On January 2 and 3, the teams had trained in Melbourne.

Australia Cricket Team T Natarajan Australia vs India 2020-21 Cricket
Get the latest updates on SA vs IND 2021-22, check out the Schedule and Live Score . Like us on Facebook or follow us on Twitter for more sports updates. You can also download the NDTV Cricket app for Android or iOS.