India vs Australia: Hardik Pandya's Man of the Series performance in the T20Is raised expectations for fans that he would play in the four-match Test series. But it looks like the all-rounder has reached full match-fitness for Test cricket yet. 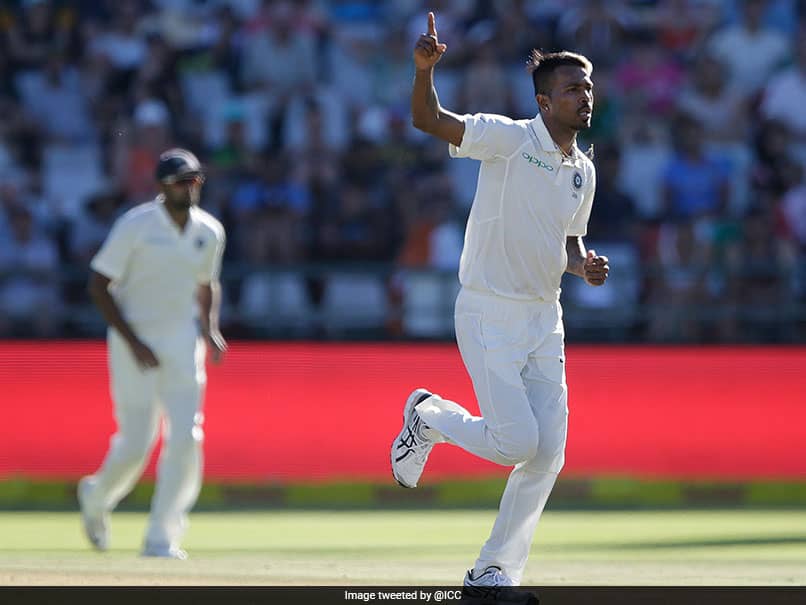 India vs Australia: Hardik Pandya celebrates a dismissal during a Test match in 2018.© Twitter

Swashbuckling India all-rounder Hardik Pandya on Tuesday said he is "heading back home", two days after raising hopes of extending his stay in Australia for the upcoming Test series following his incredible outing in the limited-overs leg. Coming off a back surgery and yet to start bowling on a regular basis, Pandya's showing in the just-concluded limited overs leg of the tour gave rise to hopes that he might be considered for Test selection. And those beliefs were strengthened when the all-rounder, after his match-winning effort on Sunday, said he wouldn't mind staying back if the team management wants. However, two days later, he confirmed that he is going back to India.

"I think I should head back home and spend some quality time with my family. I haven't seen my child for four months, so I'd like to spend some time with family right now," Pandya said after the third and final T20 International against Australia.

"Maybe in the future. I don't know, maybe," he added when asked about his Test comeback.

Earlier, asked if he aspired to stay back for the Test series starting December 17, Pandya had said, "It's a different ball game, I think I need to be, I mean I don't mind but at the end of the day, the call is on the management."

In the company of his skipper Virat Kohli, Pandya again threatened to take India home but Australia held nerves to finish with a consolation win after conceding the series in the second game on Sunday. For the sheer impact he made with his astonishing hitting, Pandya was named the Man of the Series.

"I'm quite pleased, and wouldn't mind getting the Man of the Series award, but it was a team effort.

"We all decided after the second ODI that we'll treat this as a four-match series now and we were hoping that we would win 3 three of four and that's what we got, so happy with that," Pandya said.

India lost the ODI rubber 1-2 after going down in the first two matches but fought back brilliantly to claim the T20I series with wins in the first and second game respectively.

Pandya underwent a back surgery in October last year in the UK. His lower back had troubled him since the Test series in England in 2018. The surgery kept him out of action for almost a year, with the all-rounder last playing a T20 International against South Africa at home in September 2019.

He missed the Tests against the same opposition after that, the home series against Bangladesh and West Indies, a T20I series against Sri Lanka and ODIs against Australia at home, and the entire tour of New Zealand earlier this year.

Hardik Pandya Australia vs India 2020-21 Cricket Australia vs India, 3rd T20I
Get the latest updates on IPL 2021, IPL Points Table , IPL Schedule 2021 , live score . Like us on Facebook or follow us on Twitter for more sports updates. You can also download the NDTV Cricket app for Android or iOS.