India vs Australia: The visitors face the hosts in an upcoming four-match Test series, which begins from December 17, and Virat Kohli revealed if Hardik Pandya is ready or not to make his way back into the side's Test cricket team. 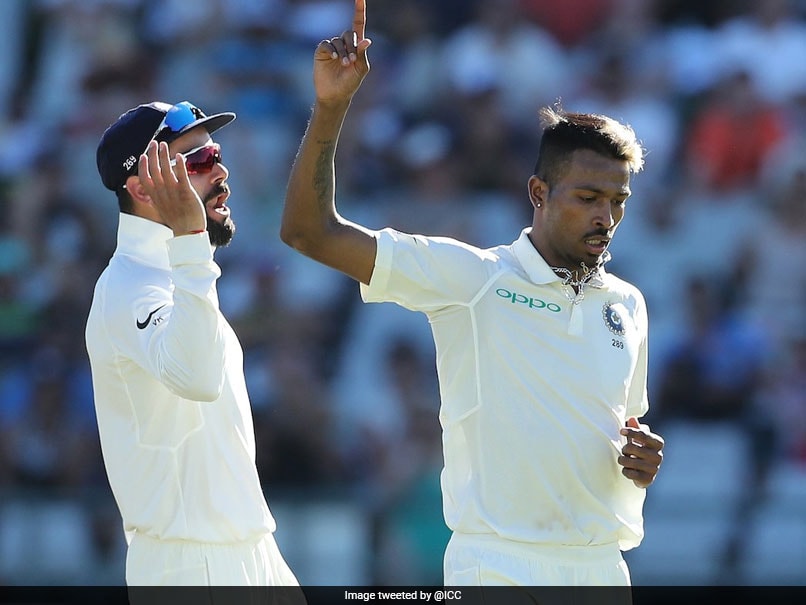 Hardik Pandya celebrates a dismissal with Virat Kohli during a Test match for India.© Twitter

Hardik Pandya's stupendous batting in the white ball series has given him an extra option of a designated "finisher" but India skipper Virat Kohli is clear that the all-rounder needs to start bowling regularly in order to be considered for Test cricket. Pandya has had scored of 90 and 92 in the first and third ODIs respectively and a match-winning knock of 42 not out in 22 balls in the second T20I, which helped India to seal the T20 series, got him the Man of the series award. Asked if he would be tempted to keep Pandya back as a pure batting option for the upcoming four-Test series, Kohli answered in the negative. "Hardik couldn't bowl and we knew he will not be able to bowl but we saw in the IPL the headspace that he has been. But Test cricket is a different challenge and we need him to bowl," Kohli was clear about priorities.

"We have spoken about it. He is one guy who brings in a lot of balance for us in overseas conditions like South Africa, England. We were able to compete for longer periods of time and he adds a lot of balance in terms of his bowling."

Kohli believes Pandya is getting into the zone where he would like to perform in all formats of the game.

"He is definitely in a zone where he wants to perform for India in all three disciplines. That's always been his 'X-factor'. In white ball cricket, we found some one who can finish games consistently," the skipper said.

But according to him, even Pandya realises that he needs to get back to peak bowling form.

"He himself wants to get back into the bowling space and make sure he is available in Tests because it becomes way more important for five days, that little bit extra.

"He understands that he has to come back the fittest he is able to," he added.

Hardik Pandya Australia vs India 2020-21 Cricket
Get the latest updates on IPL Auction 2023 and check out  IPL 2023 and Live Cricket Score. Like us on Facebook or follow us on Twitter for more sports updates. You can also download the NDTV Cricket app for Android or iOS.