India vs Australia: Hanuma Vihari has been ruled out of the fourth Test in Brisbane while Shardul Thakur is likely to replace Ravindra Jadeja, according to a PTI report. 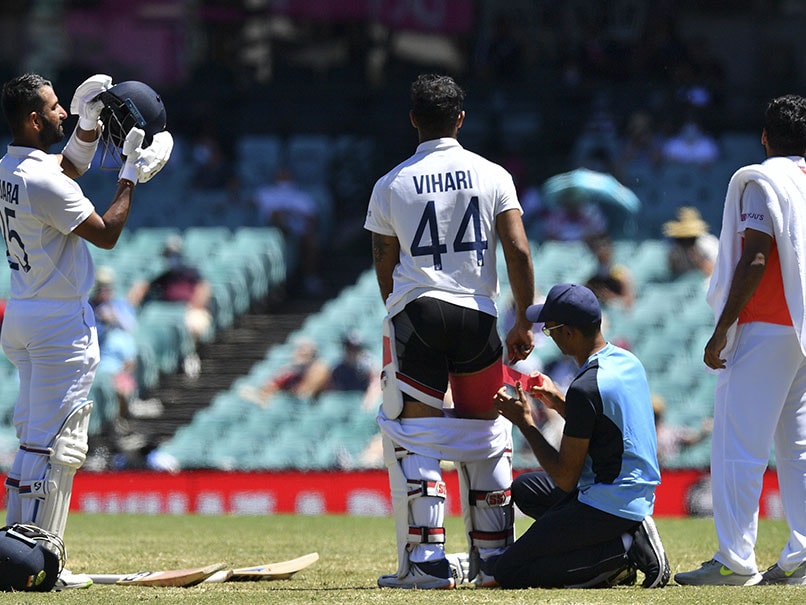 India vs Australia: Hanuma Vihari suffered a hamstring injury on Day 5 of the Sydney Test© AFP

India's injury problems in the Test series against Australia compounded on Monday after the hero of their drawn game in Sydney, Hanuma Vihari, was ruled out of the fourth and final match with a hamstring tear that could keep him out of action for a considerable time. It has been learnt that Vihari was taken for scans after the match got over and the reports are expected by late evening in Sydney or Tuesday morning. However, a BCCI source confirmed to PTI that Vihari is unlikely to be fit in time for the next Test match starting in another three days' time. Vihari scored 23 off 161 balls in an exhausting performance to save the match with Ravichandran Ashwin.

"The extent of Vihari's tear can only be ascertained after the scan reports come through. But even if it's a grade 1 tear, he is out for at least four weeks and then will need some rehabilitation time. So it's not only Brisbane Test but also, he won't be a part of England Tests at home," a senior source revealed on Monday.

The Indian team won't be missing Vihari to that extent against England as in a home series, there was little chance of him making it to the first XI with an extra bowler always being the preferred option.

Vihari will again be required on the seaming tracks in England where an extra batsman will certainly be a part of the playing XI.

As far as Vihari's replacement is concerned, the team only has two options -- either to play Wriddhiman Saha as a wicketkeeper and Rishabh Pant purely as a batsman or bring in Mayank Agarwal as a middle-order batsman who can take on the second new ball.

As of now, there is little or no chance of an out of form Prithvi Shaw being considered in the playing XI.

It is learnt that both Vihari and Pant, who played a career-defining 97-run knock on Monday, were given multiple pain-killers so that they could carry on.

In another important development, Shardul Thakur, with way more first-class experience and better batting abilities compared to rookie Thangarsu Natarajan, is likely to replace an injured Ravindra Jadeja in Brisbane on a track that is supposed to be the bounciest of the series.

Shardul was also in contention to play the second Test of his career in Sydney but Navdeep Saini's pace on a placid track became a clincher.

However, with Jadeja's injury, the Indian team will have no option but to play one among Shardul and Natarajan with the former being the favourite at the moment.

Rishabh Pant Australia vs India 2020-21 Cricket
Get the latest updates on ICC T20 Worldcup 2022, check out the Schedule and Live Score. Like us on Facebook or follow us on Twitter for more sports updates. You can also download the NDTV Cricket app for Android or iOS.