Australia vs India: Hanuma Vihari and Ravichandran Ashwin batted out the entire evening session on day five to eke out a memorable draw against Australia in third Test in Sydney. 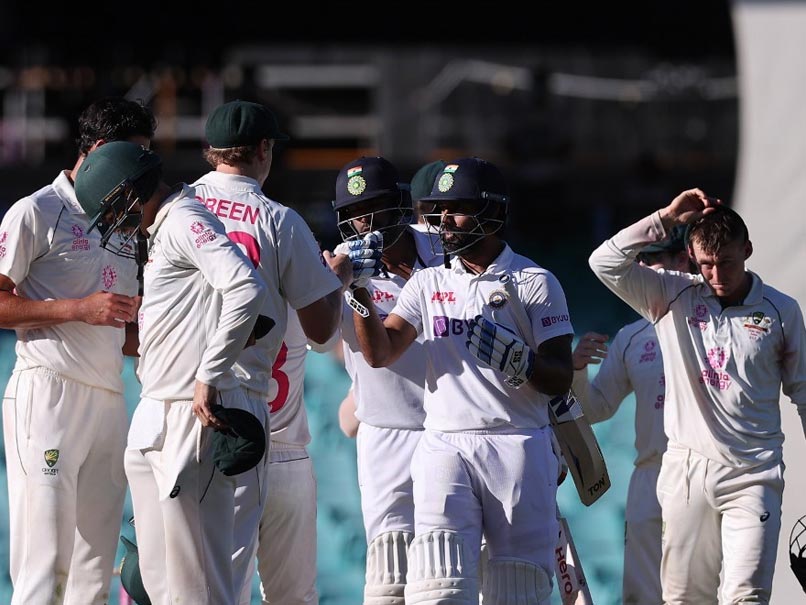 AUS vs IND: Hanuma Vihari and R Ashwin batted for more than three hours to earn a draw for India.© AFP

A courageous and injury-wracked India pulled off a remarkable draw in a tense third Test against Australia Monday as they survived against the hosts' much-vaunted bowling attack to take the series into a decider. They resumed day five at 98/2, needing a further 309 runs after being set a huge 407 to win when Australia declared their second innings at tea Sunday on 312 for six.

No team had ever bettered 288 to clinch victory in the fourth innings at the Sydney Cricket Ground, with Australia achieving that mark against South Africa in 2006.

But India gave it a massive go, passing 288 in the final session to fray the nerves of Australian team throwing everything they had at them.

The visitors abandoned any hope of victory but they bravely clung on for the draw with Hanuma Vihari, nursing a hamstring injury, surviving 161 balls for just 23 runs and Ravichandran Ashwin, who had treatment on his ribs, making 39.

They steered India to 334 for five at the close, 73 runs adrift.

Their resistance was built on the back of an explosive 97 from Rishabh Pant and a typically gritty 77 from Cheteshwar Pujara, who passed 6,000 Test runs, but also helped by wicketkeeper Tim Paine dropping three catches.

It culminated an absorbing Test marked by some high quality batting, led by Steve Smith's 131 and Pant's 97, and razor-sharp fielding.

But it will also be remembered for allegations India were racially abused by sections of the Sydney Cricket Ground crowd, with investigations underway and tough action promised against anyone at fault.

After Australia won the first Test in Adelaide by eight wickets then India bounced back in Melbourne by the same margin, the series now heads to Brisbane later this week for the final chapter.

It will be a depleted India again at the Gabba, with fast bowlers Mohammed Shami and Umesh Yadav and batsmen KL Rahul out injured and question marks over all-rounder Ravindra Jadeja, who dislocated his thumb in Sydney.

Australia removed openers Shubman Gill for 31 and Rohit Sharma for 52 before stumps on day four, and when Nathan Lyon accounted for captain Ajinkya Rahane without adding to his overnight four in Monday's second over the end appeared nigh.

But Pant, who took a nasty blow to his elbow while batting in the first innings and didn't keep wicket on Sunday, surprisingly came in at number five ahead of Vihari and produced some fireworks.

He came to the wicket with no strapping on his hurt elbow and, after settling in and surviving a missed catch by Tim Paine on three, began to hit out, smacking a four and a six off Lyon on consecutive balls.

Batting in Twenty20-style, he then clobbered two more sixes in a row off Lyon before bringing up his third Test 50 off just 64 balls.

Paine dropped him again on 56, both times off Lyon.

He kept the scoreboard ticking over after lunch and a third Test century looked imminent only for the 23-year-old to throw his bat one time too many, caught by Pat Cummins off Lyon.

His wicket shattered a 148-run partnership with Pujara, who resumed the day on nine and slowly reached a second consecutive 50.

In the process he brought up 6,000 career runs, the 11th Indian to achieve the feat, before being bowled by Josh Hazlewood.

That left Vihari and Ashwin to weather the storm and pull off an unlikely draw, so exhausted that they gave up running between the wicket at the end.

Sydney Cricket Ground (SCG), Sydney Australia vs India 2020-21 Cricket Australia vs India, 3rd Test
Get the latest updates on IPL Auction 2023 and check out  IPL 2023 and Live Cricket Score. Like us on Facebook or follow us on Twitter for more sports updates. You can also download the NDTV Cricket app for Android or iOS.