Former cricketers, including Shane Warne, took to Twitter to have their say on the contentious run-out call, involving Australia captain Tim Paine. 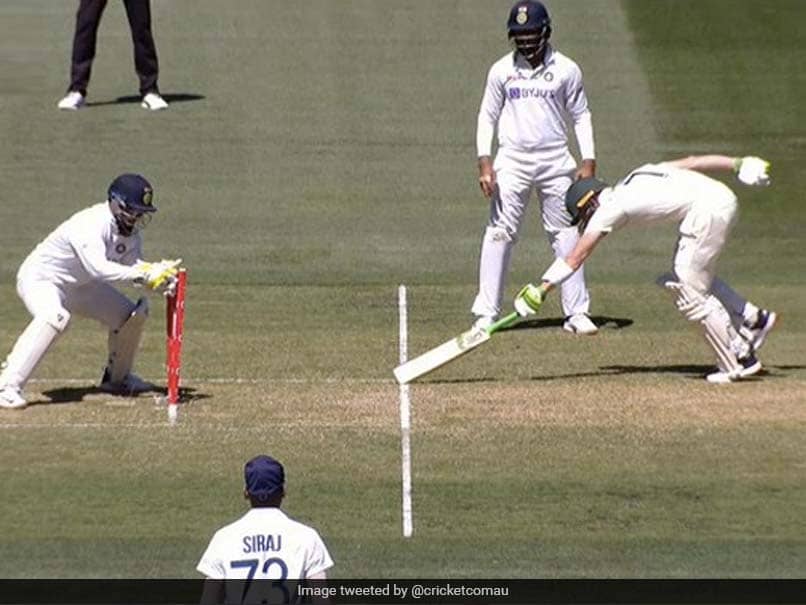 Tim Paine survived a close run out call on Day 1 of the Boxing Day Test at the MCG.© Twitter

Tim Paine survived a close run out call before being outfoxed by Ravichandran Ashwin on the opening day of the Boxing Day Test at the Melbourne Cricket Ground on Saturday. Some hesitation between Paine and Cameron Green almost led to the former's downfall. Green prodded the ball towards mid-off and set off for a run, Paine didn't seem too keen but went through. Rishabh Pant whipped the bails off, and the initial few replays seemed to show that the bat was on the line. Another look from a different angle, however, worked in Paine's favour as the third umpire gave the benefit of the doubt to the Australian captain. Paine, however, didn't hang about for much longer as Ashwin had him caught at backward short leg for 13.

However, many including spin great Shane Warne took to Twitter to express their surprise at the third umpire's decision.

Very surprised that Tim Paine survived that run out review ! I had him on his bike & thought there was no part of his bat behind the line ! Should have been out in my opinion

That was OUT.
Jason Holder was right. If players can be in a bio-bubble for soooo long....let umpires should be doing the same. #AusvInd

This is very poor umpiring at the highest quality of the game. pic.twitter.com/OLGkI9vMPj

Umpires looking for "conclusive evidence" didn't bother to even check the stump cam view? Some umpiring.

It's damn clear that it's on the line!
OUT!
Poor decision by the 3rd umpire!

Third umpire watching the replay before pressing Not out. #AUSvIND pic.twitter.com/VUuee69Zfn

Indian bowlers performed brilliantly on the opening day after Australia won the toss and elected to bat.

Jasprit Bumrah and Ravichandran Ashwin were unplayable for long periods of the first session, with the latter once again accounting for the wicket of Steve Smith, who was dismissed for a duck.

Marnus Labuschagne and Travis Head did well in the first hour of the second session but India wrestled back the control with Bumrah removing Head and debutant Mohammed Siraj taking his maiden Test wicket to send Labuschagne back to the pavilion.

Siraj took his second wicket, removing Cameron Green after the Tea break to extend India's advantage with Paine following his teammate back to the pavilion an over later.

India Cricket Team Tim Paine Shane Warne Wasim Jaffer Australia vs India 2020-21 Australia vs India, 2nd Test Cricket
Get the latest updates on IPL 2021, IPL Points Table , IPL Schedule 2021 , live score . Like us on Facebook or follow us on Twitter for more sports updates. You can also download the NDTV Cricket app for Android or iOS.