Australia vs India: Ravindra Jadeja completed a brilliant catch to sent Matthew Wade packing despite a minor coming together with Shubman Gill. 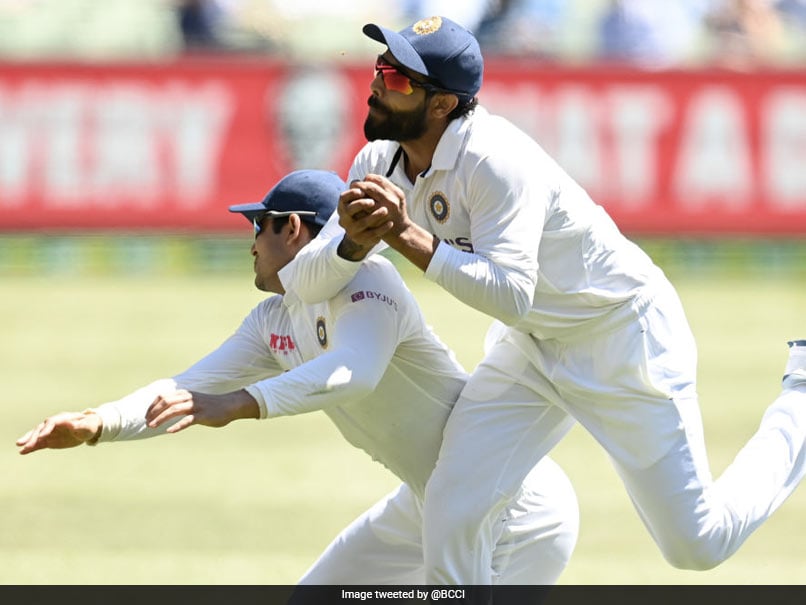 Ravindra Jadeja held onto a fine catch despite colliding with Shubman Gill.© Twitter

Ravindra Jadeja avoided "disaster" as he pulled off a fine running catch off Ravichandran Ashwin's bowling to send Matthew Wade back to the pavilion in the ongoing second Test matchon Saturday. Ashwin, in the 13th over, beat Wade in flight as the Australian opener mistimed a lofted shot. Shubman Gill and Jadeja both went charging for the catch and bumped into each other, but fortunately for India, Jadeja managed to hold on to the catch.

Cricket Australia took to Twitter to share the video of the catch and captioned it as "Almost disaster! But Jadeja held his ground and held the catch!"

Earlier on Day 1, Australia skipper Tim Paine won the toss and opted to bat at the Melbourne Cricket Ground.

Indian bowlers found their line and length from the word go as Jasprit Bumrah struck in his third over to send Joe Burns packing for a duck.

Wade kept playing his shots but as soon as Ajinkya Rahane brought Ashwin into the attack, the left-handed batsman looked a bit dodgy in his approach.

Ashwin removed Wade and then in his next over got the big wicket of Steve Smith, the number one ranked Test batsman, for a duck.

India finished the first session on top, restricting the hosts to 65 for three at Lunch.

Australia, who lead the four-match series 1-0, have fielded an unchanged XI. On the other hand, India have made four changes in total.

Jasprit Bumrah Australia vs India 2020-21 Australia vs India, 2nd Test Cricket
Get the latest updates on ICC T20 Worldcup 2022 and CWG 2022 check out the Schedule, Live Score and Medals Tally. Like us on Facebook or follow us on Twitter for more sports updates. You can also download the NDTV Cricket app for Android or iOS.