Australia vs India, 4th Test: Rishabh Pant Feels "It's Been A Dream Series" After Heroic Knock In Border-Gavaskar Trophy Victory

Australia vs India, 4th Test: Rishabh Pant played a match-winning knock on Day 5 at Brisbane to lead India to victory, and also retain the Border-Gavaskar Trophy. 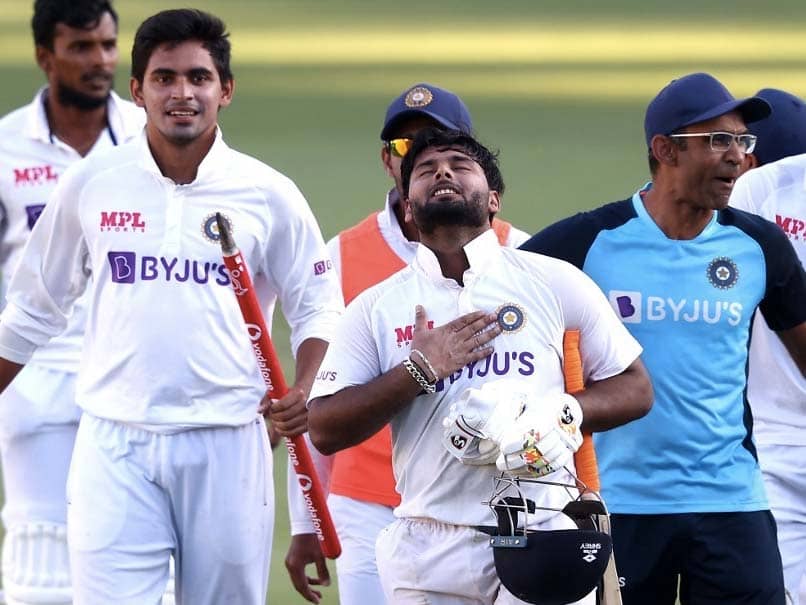 Rishabh Pant slammed an unbeaten knock of 89 runs off 138 balls, to lead India to victory against Australia on Day 5 of the fourth Test match, at The Gabba in Brisbane. The three-wicket win also meant that the visitors retained the Border-Gavaskar Trophy, and won the four-match Test series. During the post-match ceremony, an emotional Pant said, "This is one of the biggest moments of my life now, and I'm happy that all the support staff and all my teammates supported me even when I wasn't playing".

Pant, who has been criticised for his performances in international cricket, silenced his critics with a T20-like knock. The wicketkeeper-batsman credited India's team management for always backing him. "It's been a dream series. The team management always backs me and tells me, you are a matchwinner and you have to go win the match for the team," he quipped.

Pant also slammed a valiant 97-run knock during the third Test match, which was crucial in holding Australia to a draw at the Sydney Cricket Ground.

"I keep thinking every day that I want to win matches for India, and I did it today," he added.

Also revealing about the pitch condition, Pant said, "It was a fifth-day pitch and the ball was turning a bit. I thought I have to be disciplined with my shot selection."

India had a slow start on Day 5, with opener Rohit Sharma losing his wicket cheaply in the early stages. With the departure of India's vice-captain, 21-year-old Shubman Gill smashed 91 runs off 146 balls to help his side stage a turnaround.

Test specialist Cheteshwar Pujara once again proved his mental toughness with a resilient knock of 56 from 211 balls. The likes of Ajinkya Rahane (24) and Washington Sundar (22) also made decent contributions to the scoreboard.

With the win, India will be going into their upcoming four-match Test series against England on a positive note. The first Test match starts from February 5.

Rishabh Pant Shubman Gill Australia vs India 2020-21 Australia vs India, 4th Test Cricket
Get the latest updates on IPL 2021, IPL Points Table , IPL Schedule 2021 , live score . Like us on Facebook or follow us on Twitter for more sports updates. You can also download the NDTV Cricket app for Android or iOS.