India vs Australia: Matthew Wade had some witty chatter to share with Shikhar Dhawan after a close stumping attempt. 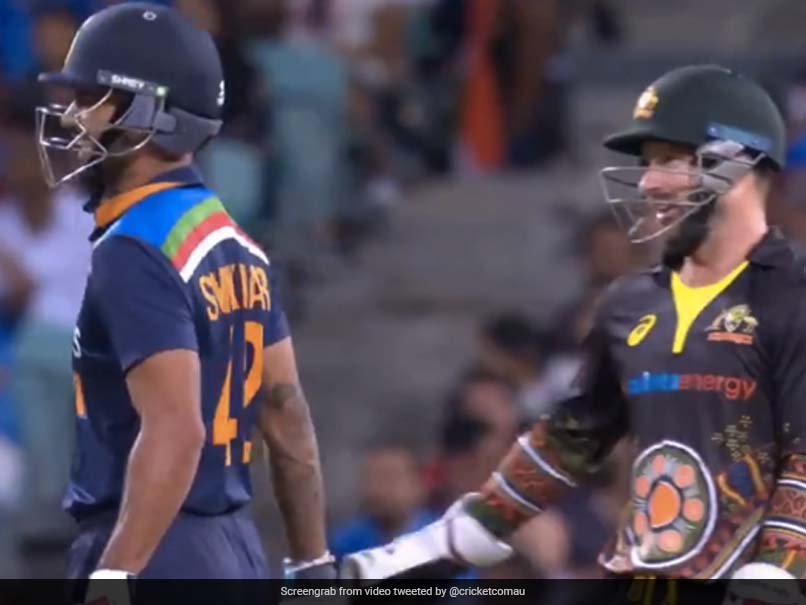 Former India captain MS Dhoni is known for his lightning-fast reflexes behind the stumps, and batsmen were especially wary playing against him as they knew he would punish even their smallest of mistakes. During the thrilling second T20 International (T20I) between Australia and India, Australia wicket-keeper and stand-in captain Matthew Wade rued not being as quick as Dhoni, after a close call on an attempted stumping against India opener Shikhar Dhawan. While Dhawan was batting during India's chase of 195 at the Sydney Cricket Ground on Sunday, he missed a cut shot off Mitchell Swepson's bowling. He lost his balance momentarily and seeing his foot off the ground, Wade immediately whipped the bails off.

Replays showed that Dhawan had got his foot down just in the nick of time.

Immediately after the third umpire decision, Wade was heard telling Dhawan that he was not as quick as MS Dhoni.

"Not Dhoni, not quick enough like Dhoni," Wade is heard saying from behind the stumps as Dhawan breaks into a laugh.

Dhawan went on to score his 11th T20I half-century, before being dismissed by Adam Zampa for 52.

Earlier, Wade hit 58 after Australia were put in to bat before being run out in comical circumstances. His knock helped Australia post 194/5.

Dhawan's half-century as well as quick forties from Virat Kohli and Hardik Pandya saw India through as they took an unbeatable 2-0 lead in the three-match series.

Shikhar Dhawan Cricket
Get the latest updates on Fifa Worldcup 2022 and check out  Fifa World Cup Schedule, Stats and Live Cricket Score. Like us on Facebook or follow us on Twitter for more sports updates. You can also download the NDTV Cricket app for Android or iOS.