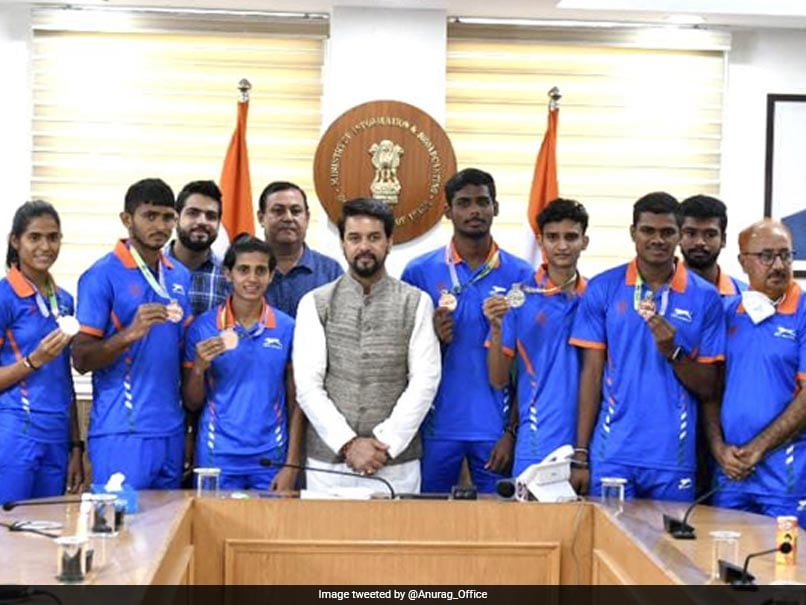 Union Minister of Youth Affairs and Sports Anurag Thakur on Wednesday met with athletes who came back from Nairobi after participating in World Athletics U20 Championships. The Indian contingent returned with three medals -- two silver and a bronze. Shaili Singh claimed the women's long jump silver medal in the tournament on Sunday adding to India's tally of bronze won by the mixed team in the 4x400m relay and the silver by Amit Khatri in the men's 10,000m walk race.

Anurag Thakur told ANI that the motive behind meeting the youngsters was to congratulate and motivate them.

"We also would like to know how we could help, so more people can come from grass route level and how we can do things better that will help us to get more players, so we need suggestions from you all," he told the athletes in the meeting.

Thakur while talking about India's performance in the World Athletics U20 Championships said: "We are happy that we provided them better training facilities and they reverted our effort in terms of medals. We are so happy and we wish many more players come and win medals for the country in the upcoming events."

India till date have won seven medals in the World Athletics U20 Championships and this was the very first time that a contingent has won more than one medal.