The athletes in the World Athletics Championships will make their way 150 metres (165 yards) through a unique cooling tunnel into the air-conditioned Khalifa stadium where the climate is maintained at a pleasant 23-25 degrees. 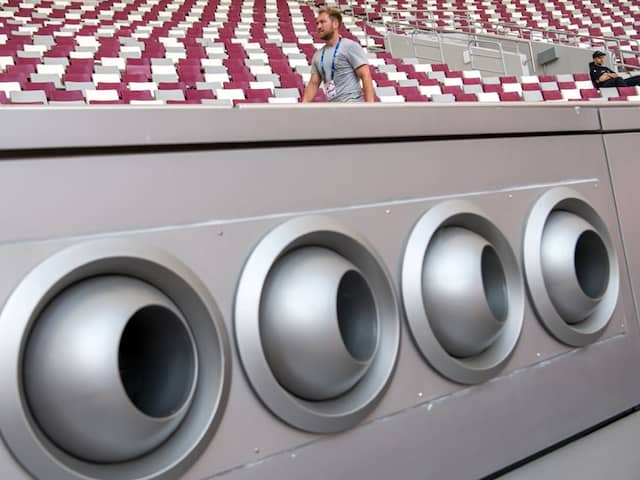 Doha organisers have dramatically altered the timing of the road races.© AFP

Athletes competing at the World Athletics Championships which kick off in Doha Friday will warm up on a field where daytime temperatures reach 38 degrees celsius (100 degrees Fahrenheit) and humidity hovers around 50 percent. But they will then make their way 150 metres (165 yards) through a unique cooling tunnel into the air-conditioned Khalifa stadium where the climate is maintained at a pleasant 23-25 degrees. The sophisticated system is being held up by Qatari authorities as proof they will be able to keep 2022 football World Cup venues at comfortable temperatures, despite concerns over the impact of the Gulf climate.

A computerised system will prepare athletes' bodies for the differential by lowering the temperature in stages as they proceed through the brightly lit underground walkway into the 46,000-capacity venue.

"They will have a thermal journey," said Sebastien Racinais, head of athlete health and performance research at Aspetar, the Gulf's first specialised sports medicine hospital.

"But the temperature will not be freezing in the stadium -- it is actually not good to have too cold a temperature in the stadium. Heat is good for the sprinters, but it's an additional stress for the endurance athletes."

Racinais said that athletes would be readily able to adapt to the extremes of heat and humidity of Qatar's Arabian desert climate if given time to acclimatise.

"The human species is probably the animal species with the best heat adaptation capacity," he said in his office overlooking the World Championship warm-up field.

"After a few days of training in the heat, the athletes will undergo some heat adaptations."

One of them is an increase in plasma which will expand blood volume so it can be sent both to the muscles and to the skin -- for cooling purposes.

Repeated exposure to the local climate would also allow athletes to increase their sweat rate "improving the efficiency of the cooling at the skin-level", he added.

Khalifa, the principal venue for the Championships, opened in 1976 and was entirely overhauled ahead of a relaunch in 2017.

Its elaborate cooling system has been deployed during other high-profile athletics meetings including Diamond League events.

"It is not strange that the world championships are held in summer or heat -- but be assured that we care for the safety of players and crowds," Qatar's chief organiser for the Worlds, Dahlan al-Hamad, told AFP.

Organisers are understood to have disabled low-level vents in the stadium to eliminate any chance that air currents could affect events like the javelin.

Heat is the new altitude

As well as adopting heat-combatting measures at the stadium, Doha organisers have dramatically altered the timing of the road races -- staging them in the nighttime and shifting the marathon to midnight for the first time.

"Before 2008 in Beijing (Olympics), everyone was saying it would be impossible to run a fast marathon because of heat -- but at the end Samuel Wanjiru established a new Olympic record of two hours six minutes," said Racinais.

"We can expect it to be a bit slower -- but not dramatically."

While much attention has been paid to the issue of heat at the 2022 football World Cup, the conditions of Doha 2019 will be far more similar to those expected at the 2020 Summer Olympics in Japan.

Aspetar has been collaborating with the International Olympic Committee ahead of the Tokyo Games, expected to be the hottest in history, on how best to manage heat and educate athletes.

Some athletes will even ingest pill-sized thermometers to monitor the effects of Doha's heat, with the data expected to be used to prepare for Tokyo, according to the IAAF.

"We are also working directly with various professional teams, federations or individual athletes coming to Aspetar to have a training camp in order to adapt," said Racinais.

Just 15 percent of athletes at the 2015 Beijing World Championships prepared specifically, while a year later 38 percent of participants at the UCI cycling world championships in Doha had done so.

"There is also a current trend to use heat as a training stimulus in the same way as we have been using altitude training camps for years," said Racinais, who was surrounded by electronic heat and humidity monitors due to be used by officials during the Championships.

While athletes have had ample time to prepare for Qatar's end-of-summer weather, spectators have also been encouraged to get ready for the heat.

"But on the other side, they don't produce heat because they don't exercise."