Usain Bolt With a Lot to Prove on Return From Injury

The 28-year-old Jamaican last raced on June 13, when he struggled to get the better of his 19-year-old training partner, the Anguillan-born British recruit Zharnel Hughes, over 200m in the New York Diamond League meeting. 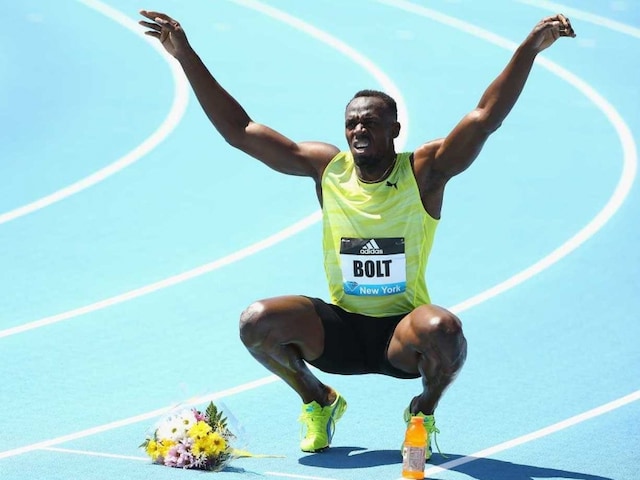 Usain Bolt returns to action after a six-week injury-enforced break in the 100 metres on the opening night of the London Diamond League meeting on Friday with question marks hanging over both his fitness and form just four weeks out from the World Championships in Beijing.

Like Mo Farah and Jessica Ennis-Hill, the British stars of the two-day Anniversary Games, Bolt will be hoping to find the Midas touch that took him to Olympic gold on the same east London track in 2012.

The 28-year-old Jamaican last raced on June 13, when he struggled to get the better of his 19-year-old training partner, the Anguillan-born British recruit Zharnel Hughes, over 200m in the New York Diamond League meeting.(Asafa Powell Backs Bolt)

Bolt has since had treatment for a pelvic problem from Dr Hans-Wilhelm Muller-Wohfahrt -- the 72-year-old German sports doctor known as 'Healing Hans', whose diverse list of clients over the years has included Michael Jordan, Diego Maradona, Luciano Pavarotti and Bono -- and has resumed training under long-time coach Glen Mills.

With American Justin Gatlin a clear leader of the world rankings at both 100m (9.74 seconds) and 200m (19.57sec), Bolt desperately needs to rediscover a measure of the form that took him to his second set of Olympic 100m, 200m and 4 x 100m relay golds three years ago.

He has only run one 100m race this year and stands joint 60th in the world rankings courtesy of the modest 10.12 sec that he clocked in winning a challenge event on a specially constructed track at the Rio de Janeiro Jockey Club on April 19.

Bolt, the 100m and 200m world record holder and reigning world champion, has been reported in the Jamaican press to have been "going well" at his European training base at Brunel University in west London but he faces not one but two tests on his comeback, with heats on the schedule at the Olympic Stadium.

"London is a special place where I love to compete," said Bolt, who is due to attend a pre-event press conference on Thursday. "I have great memories of competing in the Olympic Stadium in the summer of 2012."

The Olympic, world and European 5,000m and 10,000m champion was an impressive winner over 5,000m in Lausanne on July 9 and in the Monaco Diamond League 1500m race last Friday he showed his sharpness by finishing fifth in 3 minutes 28.93sec, missing his own European record by 0.12sec with a time that was faster than any of the three British middle-distance greats, Steve Ovett, Sebastian Coe and Steve Cram, ever managed at their specialist distance.

Despite the continuing controversy over Salazar, Farah told reporters in Monaco he was "in a happy place".

Olympic heptathlon champion Ennis-Hill plans to contest the 100m hurdles on Friday and the long jump and 200m on Saturday before deciding whether -- a year after giving birth to son Reggie -- she is fit enough to challenge for a medal at the World Championships.

Other Olympic champions returning to the scene of their 2012 triumphs include Kenya's David Rudisha, who will have the chance to avenge his Lausanne 800m defeat by Botswana's Nigel Amos, and French pole vault world record-holder Renaud Lavillenie, who bounced back from defeats in Paris and Lausanne with a 5.92m victory in Monaco last week.