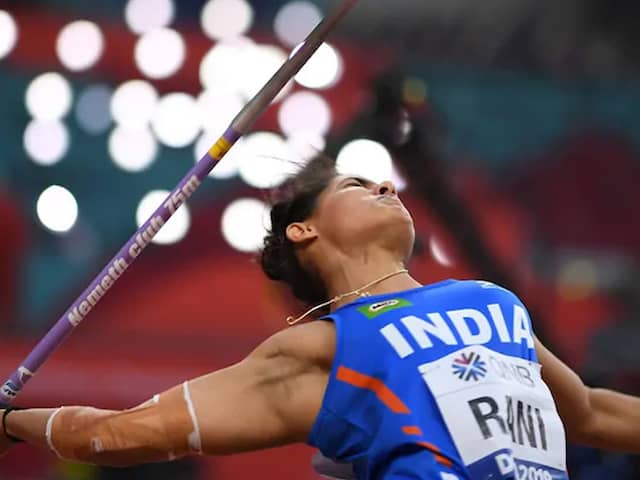 Continuing her good run, Annu Rani bagged the gold medal in the women's javelin throw event at the 59th National Open Athletics Championships in Ranchi on Thursday. Annu, who set the national record at 62.43m to enter the women's javelin throw final at the World Championships in Doha earlier this month, registered a comfortable win at the Birsa Munda Athletics Stadium. Each of Annu's six throws were better than the best managed by her Railways' team-mate and rival, Sharmila Kumari.

Meanwhile, star javelin thrower Neeraj Chopra said he decided not to take part in the championships on the advice of his coach.

"AFI officials talked to my coach. And coach told me you are getting better but you never know what will happen in a competition when you exert yourself after so long. Then I decided to skip the event as I thought it is not good to take part by not heeding to what they are saying," Neeraj told PTI.

ONGC's Suresh Kuma, 28, bagged the top honours in men's 10000m race at the national level after five years by clinching the gold with a timing of 29 minutes 41.25 seconds. He last emerged victorious in the National Inter-State Athletics Championships in Lucknow in June 2014.

Earlier, Jinson Johnson (AFI) and Ajay Kumar Saroj (Railways) each won their men's 1500m heats and set up what could be an interesting final.

The two runners were content to finish ahead of the pack in the two heats, nudging ahead of Rahul (Delhi) and Bir Singh (Haryana) by 0.21 seconds and 0.45 seconds respectively.

Services' T Santhosh Kumar, 21, clocked 51.78 seconds to be the most impressive athlete in the men's 400m hurdles.

MP Jabir (AFI) and Ayyasamy Dharun (Tamil Nadu), who represented India in the World Championships, did enough to win their respective heats.

World University Games champion Dutee Chand emerged the fastest in the women's 100m semifinals qualifiers, clocking 11.55 seconds in the heats. Archana Suseendran also got through to the semifinals after finishing third in her heats in 11.87s behind Priyanka Kalagi (Railways) and MV Jilna (Kerala).

ONGC's Siddhanth Thingalaya was the only qualifier in the men's 110m hurdles with a timing of 13.83 seconds, which is only six-hundredths of a second slower than the meet record he set back in Kolkata in 2011. If he can sustain his rhythm in the final, he could rewrite that mark.