Justin Gatlin, the 100m world champion is plotting to defend his title in Doha this year. 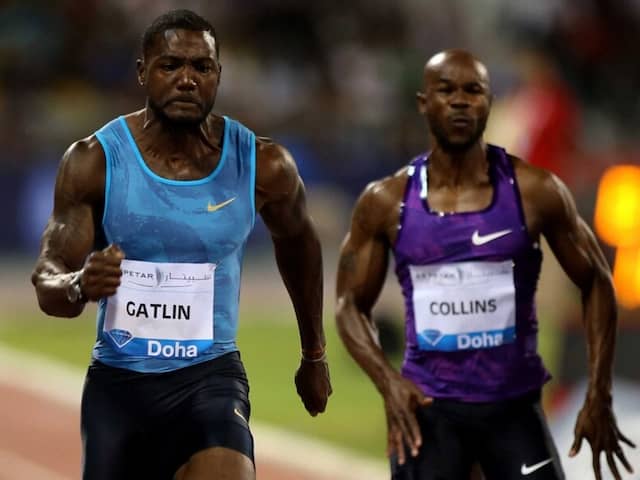 Justin Gatlin is in no mood to be shoved off centre stage.© AFP

A phalanx of hungry young American sprinters may be waiting in the wings, but Justin Gatlin is in no mood to be shoved off centre stage. The 37-year-old 100m world champion is plotting to defend his title in Doha this year, a warm-up act before a fourth Olympic Games campaign at Tokyo 2020. On Thursday, Gatlin breezed through his 100m heat at the US championships in Des Moines, safe in the knowledge he has already booked his ticket to Qatar by dint of his 2017 gold medal. That opening heat may turn out to be the last outing of this weekend's meeting for Gatlin, who was non-committal about whether he planned to put his ageing limbs through two more rounds at Drake University's famous Blue Oval.

But while Gatlin acknowledges he has to manage his fitness more carefully these days, the competitive fires within his muscular 6ft 1in frame are burning just as brightly.

"He likes winning," was the verdict of training partner Isiah Thomas, standing nearby on Thursday when Gatlin was asked why he continued to compete at the highest level.

Gatlin, whose career has been punctuated by two suspensions for doping offences, explains his relentless need for speed as a quest for the unobtainable.

"You get to a point where you start chasing unicorns, man," Gatlin told reporters.

"It's about that adrenaline rush, getting the middle of the race, everything in your sight is just a blur. That's what it feels to run fast. Everything around you is a blur, but you're so dialed in and so focused, everything is slowing down.

"You want to feel that every time. When you come across the line, you want to excite yourself, like: 'Man, look at that time I just ran. That's crazy.'

So far this season, Gatlin has given the unicorn a reason to be glancing over its shoulder.

Gatlin has the fourth fastest time in the world at 9.87sec and also claimed the notable scalp of rising star Noah Lyles at the Diamond League meeting in Monaco.

Although Tokyo 2020 is a target for Gatlin, he has so far declined to set the clock ticking by announcing a retirement date.

"I really try not to set a date for myself," Gatlin said.

For the moment, Gatlin is enjoying being able to compete alongside the new generation of sprinters led by the likes of Lyles, 100m rival Christian Coleman and rising 400m prodigy Michael Norman.

"USA always had the depth when it came to talent," Gatlin said. "But I think in the last couple of years now they've got their confidence back."

Coleman, who was eight years old when he watched Gatlin win the 100m gold at the 2004 Athens Olympics, said US sprinting's elder statesman remained an inspiration.

"He's going to go down as an all-time great," said Coleman, the fastest man in the world this year over 100m with a leading time of 9.81sec. "To be able to last that long and still be performing at that level is incredible. So hats off to him. Major respect."

Gatlin, meanwhile, remains on friendly terms with Coleman, whom he mentored during his college career at the University of Tennessee, Gatlin's alma mater.

Exchanges, today, though are as likely to come via social media rather than a phone call.