Justin Gatlin clocked 9.74 seconds -- a world best for this year -- making him the fifth fastest man ever. Gatlin bettered his best mark of 9.77 which he achieved in Brussels last September. 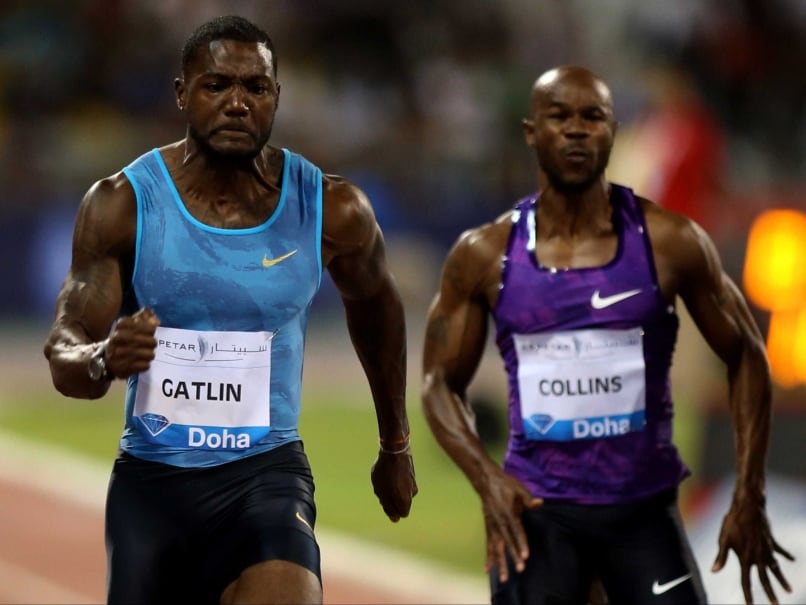 American Justin Gatlin stormed to victory at the Diamond League opener in Doha on Friday winning the 100m to serve notice to Usain Bolt ahead of the world athletics championships in Beijing in August.

The 33-year-old Gatlin, who has served two doping bans, clocked 9.74 seconds -- a world best for this year -- making him the fifth fastest man ever.

Gatlin bettered his best mark of 9.77 which he achieved in Brussels last September.

World record holder Bolt (9.58sec) was absent in Doha but the message from Gatlin, who in 2014 also recorded six of the seven fastest times, was loud and clear.

Afterwards, Gatlin said he had intended to "go out there and make a statement".

Asked if it was meant for Bolt, Gatlin replied: "To the world! To anyone who is willing to listen or watch."

Pressed further if he meant the Jamaican, he said: "You guys make him sound like he is a Lord Voldemort!"

He continued: "It goes out to him, you guys won't say his name, and six other guys who are lining up for the competition (World Championships)."

The American finished ahead of US relay team-mate Michael Rodgers, who came in second at 9.96sec, and third-placed Keston Bledman of Trinidad and Tobago (10.01).

The high-class field in Doha on Friday provided a couple of shocks.

In the other main event of the night, British double Olympic champion Mo Farah was beaten into second place in the 3,000 metres by Hagos Gebrhiwet.

The Ethiopian was cheered on by a number of his countrymen in a large and loud Doha crowd.

In a close race, Farah just failed to take first place despite battling back from fourth as he came into the final bend.

"It's an early start (to the season), but I am a bit disappointed to finish second. It was hard, it was basically a championship race," Farah told reporters.

"Congratulations to Hagos, he did well, but at the same time I don't think I am kind of ready yet."

Another Olympic champion to be beaten was Australia's Sally Pearson in the Women's 100m hurdles.

She finished fourth, in a race won by American Jasmin Stowers who set a personal best of 12.35 seconds.

Arguably the stand out performance of the night was from Cuba's Pablo Pichardo who reached 18.04m in the triple jump, the third longest ever in the event, as world champion Teddy Tamgho suffered a ruptured Achilles tendon.

Tamgho had achieved a jump of 17.24m on his second attempt before pulling out with a probable season-ending injury on the third jump.

The Frenchman will undergo surgery in Qatar on Saturday morning, his manager Benjamin Soreau told AFP.

Meanwhile, Allyson Felix won in Doha for an 11th time after victory in the 200 metres.

The remarkable American, a four-times Olympic champion and eight-times world champion eased through the event in a meeting record time of 21.98.

The first race of the night was the men's 400m, won by 2005 world champion, Bershawn Jackson.