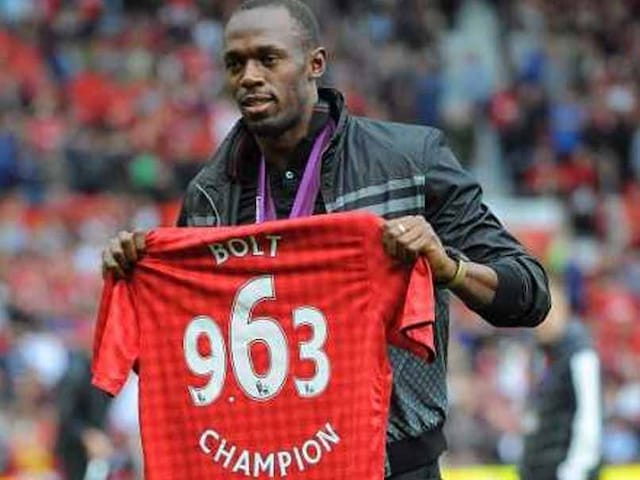 Sprint legend Usain Bolt had arguably the hardest time of his glittering career at the World Athletics Championships being held in London. After failing to win gold in his last individual 100m, taking home the bronze, the Jamaican star suffered a massive heartbreak in the final race of his career. Running the final leg of the men's 4x100 relay for Jamaica, Bolt failed to finish when a cramp in his left hamstring led him to pull up just after teammate Yohan Blake handed him the baton. However for Bolt there was light at the end of a "rough week" as one of his favourite football teams, Manchester United, registered a comprehensive win in their opening match of the Premier League 2017-18 season.

After a rough week it's good to see victory for @ManUtd

Bolt is a known Manchester United and on numerous occasions has professed his love for the club.

Romelu Lukaku enjoyed a dream Premier League debut for the Red Devils, scoring a brace while Anthony Martial and Paul Pogba also got their name on the scoresheet.

Meanwhile, it was the first time since 2008 that a team other than Jamaica won the 4x100 relay at a major meet. This would not have been the ending Bolt would have been dreaming of when he decided to hang up his running shoes.

First, it was American Justin Gatlin who rained on Bolt's 100m parade by winning the world title.

Gatlin, who has served two doping bans and won silvers behind Bolt at the last two world championships, clocked 9.92 seconds, with teammate Christian Coleman winning silver in 9.94sec. Bolt suffered a dreadful start and could only claim bronze in 9.95sec.

And in a heartbreaking ending to an outstanding track and field career, Bolt collapsed on the track after suffering a hamstring injury.

Bolt received the baton with Jamaica in third, but halfway down the finishing straight the towering sprinter pulled up clutching his left thigh, eventually doing a forward somersault to the ground, to gasps from the 60,000 sell out London Stadium.

Comments
Topics mentioned in this article
Usain Bolt Athletics Manchester United Romelu Lukaku West Ham United Football
Get the latest Cricket news, check out the India cricket schedule, Cricket live score . Like us on Facebook or follow us on Twitter for more sports updates. You can also download the NDTV Cricket app for Android or iOS.