Jinson Johnson finished second for a silver in the men's 800m. 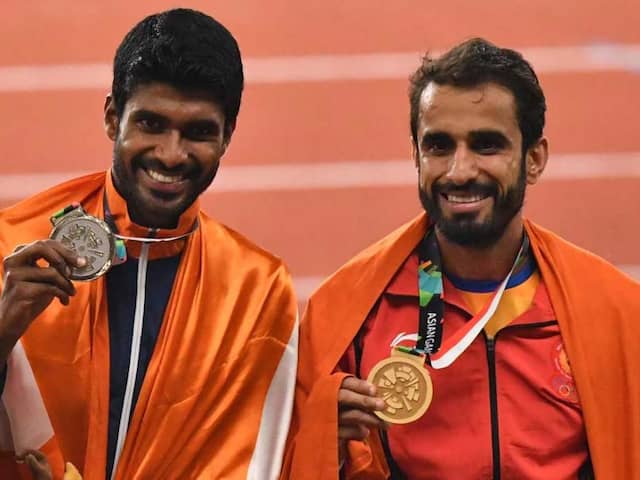 A jobless Manjit Singh came from nowhere to snatch the men's 800m gold for the biggest medal of his life but finals continued to be a riddle for P V Sindhu, taking some sheen off her historic silver at the 18th Asian Games on Tuesday. Unexpected haul of a silver and a bronze in Kurash, an indigenous central asian form of wrestling, added to the tally, along with a silver in the debut event of mixed 4x400m relay in athletics. With today's performance, India rose a rung to eighth in the overall standings with a total of 50 medals, nine of them gold, 19 silver and 22 bronze medals. The country is now just seven short of matching the 2014 tally.

The 31-year-old Manjit, an unheralded runner from Haryana who doesn't even have a national gold to his credit, chose the Asian Games to find the limelight.

In fact, he snatched it from the seasoned Jinson Johnson with a personal best of 1:46.15sec.

Johnson finished second for a silver, a rare 1-2 for India at the Games.

"I saw videos of my races at national and international events and analysed the mistakes. I was motivated to improve myself. I never thought of bettering the national mark. I just wanted to give my best. I don't have a job but my coach is from Army," said the athlete, who lives in Jind, Haryana, and comes from a family of farmers.

The quartet of Muhammed Anas, M R Poovamma, Hima Das and Arokia Rajiv clocked 3:15.71 seconds, while Bahrain ran away with the gold in 3:11.89.

In the morning competitions, compound archers picked up silver medals in both the men's and women's team events, going down to South Korea in both the finals.

It wasn't a particularly disappointing or unexpected result but the fact that the men could not defend their gold from the 2014 edition would rankle.

Then came Sindhu and her final jinx, compounded by her inability to find an answer to world No.1 Tai Tzu-Ying's deceptive game that has left most bamboozled.

For the sixth successive time, the Indian was no match for the Taipei player despite her claims of having a strategy in place for her.

"If I had played patiently and kept the shuttle in, it could have been different. It was not easy to take points from her because her defence was also good," she said after collecting India's first ever singles silver in the Asian Games competition.

The surprise package of the day title went to Kurash, a form of wrestling indigenous to central asia in which the aim is to throw the rival off his/her feet by using a towel to hod them in place.

The two teenagers didn't even have enough money to buy their kits and got them only after the intervention of the sports ministry.

"People in my village pooled in Rs 1.75 lakh to send me to training camp. They all have supported me a lot. I am forever indebted to them," a teary-eyed Balhara told PTI.

In Table Tennis, India signed off with its maiden Games medal, losing in the semifinals to Korea to settle for a bronze.

India continued its march ahead with another fairly comfortable wins in the squash team event.

Barring Harinder Pal Sandhu, who lost to Al Tamini Abdulla in the men's tie against Qatar, no other Indian faced any problem as both the men and the women inched ahead in their pursuit to qualify from the group stage.

There was no stopping the hockey juggernaut with defending champion Indian men's team making a mockery of Sri Lanka, pumping in 20 goals to remain unbeaten in the pool stages It has been a scintillating performance from the Indians in the pool stage as they have scored as many as 76 goals and conceded just three.

However, the boxers endured a winless day with both Pavitra (60kg) and Sonia Lather (57kg) losing in the quarterfinal stage to bow out of women's competition.