The Prime Minister hosted the Asian Games 2014 medallists at his residence on Tuesday morning, where he felicitated the medal winners and some coaches. 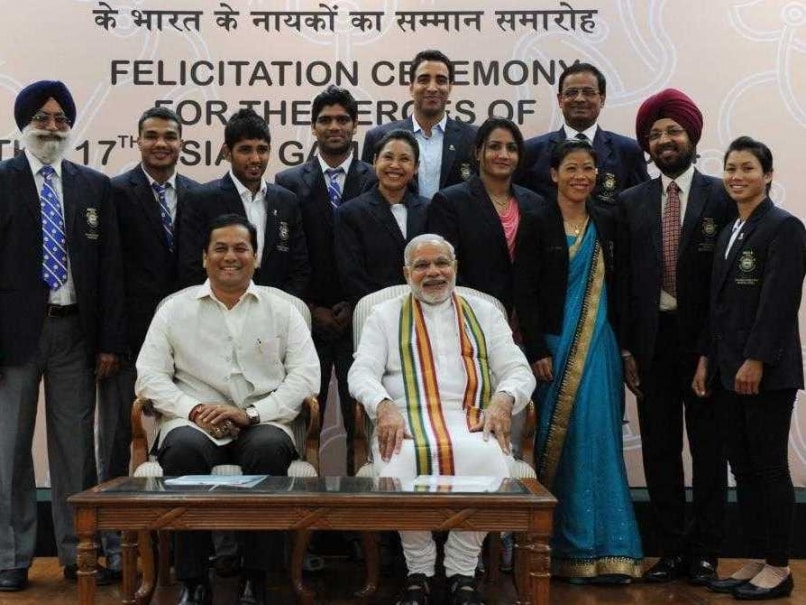 Narendra Modi with Indian athletes on Tuesday. This image was tweeted by the Prime Minister. (@narendramodi).© Twitter
New Delhi:

Floored by Indian Prime Minister Narendra Modi's informal demeanour and a "motivating speech", India's Asian Games medallists could not stop gushing about the leader after a breakfast meeting with him on Tuesday.

The Prime Minister hosted the medallists at his residence Tuesday morning, where he felicitated the medal winners and some coaches.

"It was a fantastic experience and the Prime Minister sir addressed us. His words were very motivating. He told us that we will be offered all the help and our needs will be taken care of," Jitu, who won a gold at the Asian Games, told PTI. (PM Modi Lauds Asian Games Medalists at Breakfast Meet)

"The whole shooting contingent was there and he shook hands with each one of us, spoke to us and ensured that we felt comfortable," he said.

Squash player Joshna Chinappa, who along with Dipika Pallikal won the team silver at the Games in Incheon, said it was an overwhelming experience.

"It was a once-in-a-lifetime experience for me. It is not everyday that you get to meet the Prime Minister. There was a lot of hype but he came across as a very simple person. I would say it was the highlight of my career, may be more than winning the Commonwealth Games gold medal," she said.

"We seldom get a chance to meet the Prime Minister of the country. But Mr. Modi was very gracious and was very eager to know about our needs and problems. It was a wonderful experience to meet him," said Raghunath

"The Prime Minister told us to help the government in trying to promote the game at the grassroot level. He asked us to share our experiences with school children so as to grow their interest in the sport."

Manpreet added, "It was a dream-come-true moment for me to meet the Prime Minister. He was a wonderful host. He told us that he was trying his best to develop the facilities for hockey so as to help in regaining the past glory of the sport."

"Mr. Modi told us if we have any need we should approach the SAI. He said he has instructed the concerned authorities to extend all possible help in order to develop infrastructure for the game and promote the sport at the grassroot level in India."

"It was very well done. It was very respectful, the manner in which the arrangements were done was very nice. Superb is the word. Mr Modi spoke like a friend. He wanted to know about our problems, he told us to approach him directly whenever we face any problem," he said.

"He is a powerful orator, we listened to him with rapt attention. He was very casual while interacting with us, was smiling a lot. It was different from the usual functions," he added.

Comments
Topics mentioned in this article
Asian Games 2014 Other Sports
Get the latest updates on IPL Auction 2023 and check out  IPL 2023 and Live Cricket Score. Like us on Facebook or follow us on Twitter for more sports updates. You can also download the NDTV Cricket app for Android or iOS.