Bolstered after winning the Asian Games gold medal for the second consecutive time, captain Sana Mir says her side has gone from strength to strength. 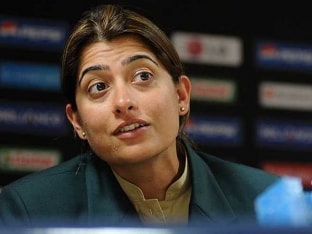 Pakistan recently suffered a humiliating ODI whitewash against Australia. That was the men's team. The women's team though is on a completely different level with success bolstering confidence in the camp.

Fresh from successfully defending their gold medal at Asian Games in Incheon, the women's team is on a high. Captain Sana Mir is especially pleased with how the team performed and predicted that the side can be more consistent if facilities are further improved in the country. "It really has been a wonderful experience because winning the gold medal was really important to us," she was quoted as saying by a Pakistan-based cricket website - Pakpassion.net. "However, let us also not forget that teams like Australia, England, New Zealand and India are well established teams with good infrastructure to back them up. We started quite late in our development of women's cricket. Although, we've been able to lessen the gap between the top teams and us, but the pressure has definitely been on us."

Appointed captain in 2009 - just four years after her debut, the 28-year-old cricketer said that she has seen expectations from her team rise with time. "People just want us to win and we've done it against the odds in 2010 and we knew that we could do it 2014 as well. But please remember that unlike the men's game, teams like Bangladesh cannot be taken lightly. They have had a lot more international exposure compared to Pakistan women and they also have international cricket at home which makes a huge difference," said leg-spinner Mir, who has 79 wickets from 70 ODI matches.

While there are questions about Misbah-ul-Haq's ability to lead the men's team, Mir has silenced her critics successfully - both as a player and as a captain. AdjudgedÂ  Player of the Tournament at the 2008 Women's Cricket World Cup Qualifier, Mir feels Pakistan Cricket Board has helped her players defy the notion that conservative elements threaten development of Pakistan women cricketers. "The PCB has played a tremendous role in the evolution and development of women's cricket in Pakistan," she said. "Wherever we go, whichever countries we tour we get positive feedback."

Mir is currently ranked seventh in International Cricket Council's ODI rankings for bowlers. There is no other Pakistani player in the top-10 batting or bowling list.

Comments
Topics mentioned in this article
Pakistan Women Asian Games 2014 Cricket
Get the latest updates on Fifa Worldcup 2022 and check out  Fifa World Cup Schedule, Stats and Live Cricket Score. Like us on Facebook or follow us on Twitter for more sports updates. You can also download the NDTV Cricket app for Android or iOS.