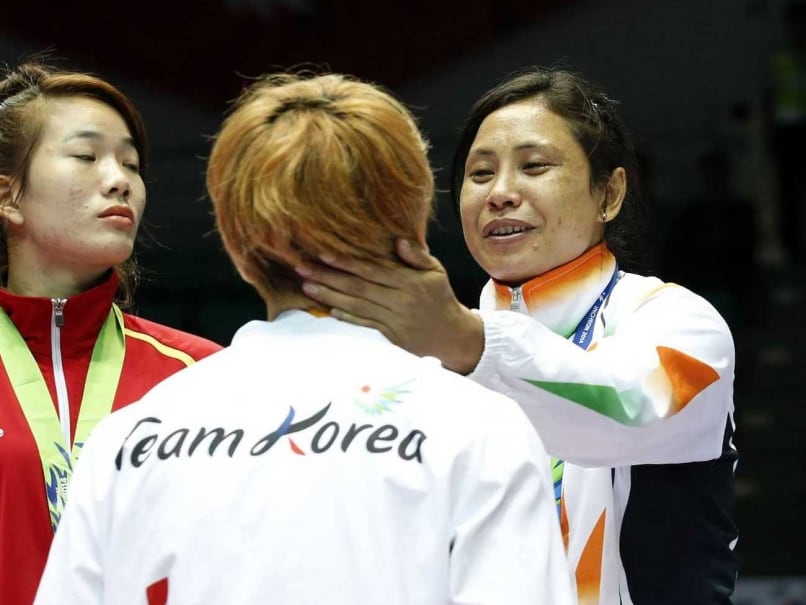 File Photo: Sarita Devi refused to wear the Asian Games bronze medal and left it behind when the presentation was over.© AFP
New Delhi:

Boxing India is confident of L Sarita Devi's return to the ring before too long after the International Boxing Federation (AIBA) suspended the 29-year-old for her petulant display at the recent Asian Games at Incheon, South Korea.

Sarita was furious after losing her semi-final bout in women's lightweight division to local favourite Park Ji-na and lodged a protest against the verdict which was rejected.

The adamant boxer refused to wear the bronze medal and left it behind when the presentation was over, an action she subsequently regretted in a letter to AIBA.

Her apology, however, cut no ice with AIBA which slapped a provisional suspension on the boxer, three coaches and leader of India's Asian Games delegation Adille Sumariwala, barring them from all AIBA events.

"This case has been sent for review by the AIBA Disciplinary Commission, and it means that... Devi, the above mentioned coaches as well as Mr Adille H. Sumariwalla will not be allowed to participate to the AIBA Women's World Boxing Championships (in) Jeju 2014," the governing body said on its website.

Sports minister Sarbananda Sonowal has asked the Indian Olympic Association (IOA) to pursue the matter and do whatever it takes to get the suspension overturned.

"We have not received any official communication from the AIBA regarding the suspension and don't know what exactly are the charges," IOA secretary general Rajeev Mehta told Reuters on Thursday.

"We are awaiting a formal communication and only after receiving that we can tell you about our next step." (Also Read: Don't Regret Asian Games Protest, Says Sarita)

Boxing India (BI) secretary general Jay Kowli virtually admitted Sarita would miss next month's world championship at Jeju City in South Korea but said the federation was trying to get the suspension lifted.

"The damage has already been done and I don't think she can participate in the world championship," Kowli told Reuters by telephone. "We are guiding Sarita and trying to ensure that the issue is favourably sorted out.

"I saw the bout and I too felt she should have been declared the winner. It was an emotional outburst and she too realised that but the damage was done by then.

"We are trying a damage control exercise now. She is an Olympic medal hope for us in the (2016) Rio Games and we are working hard to get her back in the ring."

Comments
Topics mentioned in this article
Boxing Asian Games 2014
Get the latest updates on Fifa Worldcup 2022 and check out  Fifa World Cup Schedule, Stats and Live Cricket Score. Like us on Facebook or follow us on Twitter for more sports updates. You can also download the NDTV Cricket app for Android or iOS.